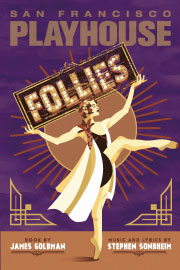 “‘Follies’ at SF Playhouse Is a Heartening, Showstopping Smash! This is one of best re-stagings of a Sondheim show that SF is likely to ever see.” – SFist

It’s 1971, and theatrical impresario Dimitri Weismann is hosting a reunion of former Follies performers in his crumbling theatre, about to be demolished to make room for a parking lot. The artists gather for one last time, reminiscing about the past and contemplating their future, before the theater dims its lights for good. Surreal, sophisticated, compelling, heart wrenching and epic in scope, this legendary masterpiece uses the musical theatre as a metaphor for the collapse of American innocence and naiveté.

JAMES GOLDMAN (BOOK) James Goldman was an American playwright, novelist, and screenwriter, honored with an Academy Award for the screen adaptation of his own play The Lion in Winter. He is also the author of the screenplays for Robin and Marion, Nicholas and Alexandra, and White Nights; and the book for Stephen Sondheim’s stage musical Follies. Mr. Goldman was born in Chicago and was a graduate of the University of Chicago before beginning postgraduate work at Columbia University in music criticism until he was drafted into the army during World War II. In 1961 his whimsical play They Might Be Giants, about a man who believes he is Sherlock Holmes and is attended by a psychiatrist named Dr. Watson, was produced by Joan Littlewood in London and 10 years later was turned into a film starring George C. Scott and Joanne Woodward and directed by Anthony Harvey, who also directed the 1968 film version of A Lion in Winter. Mr. Goldman’s first play on Broadway was a comedy about life in the army, Blood, Sweat, and Stanley Poole (1961), written with his brother William. Other work for the stage includes A Family Affair, a collaboration with John Kander, starring Shelley Berman; Evening Primrose (1966), his second collaboration with Mr. Sondheim; Oliver Twist (1982), Anna Karenina (1985), Anatasia: The Mystery of Anna (1986), and Tolstoy (1996). Mr. Goldman’s novels include The Man from Greek and Roman (1974), Myself as Witness (1980), and Fulton County (1989).