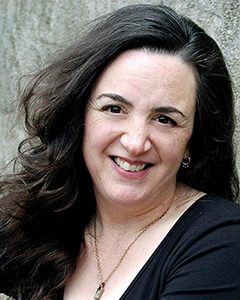 Cindy (she, her, hers) has been a fixture in the Bay Area theatre scene for many years. Regional theatre credits include sixteen seasons of A Christmas Carol and the recent Fefu and Her Friends with American Conservatory Theater, as well as work with Center REPertory Company, San Jose Repertory Theatre, TheatreWorks Silicon Valley, Broadway by the Bay, Marin Theatre Company, New Conservatory Theatre Center, and 42nd Street Moon. New York credits include Project:Lohan and Mr. Irresistible (La MaMa E.T.C. and D’Arcy Drollinger’s Back It Up Productions). Cindy also enjoys a thriving cabaret career, collaborating with Scrumbly Koldewyn on Goldfield & Koldewyn and David Aaron Brown in One Night Stand/Going Back for Seconds. In addition to multiple acting awards, Cindy has been honored with two TBA Awards for her direction of Once (42nd Street Moon) and Trog! (OASIS). She continues to direct at various theatres in the Bay Area and beyond.