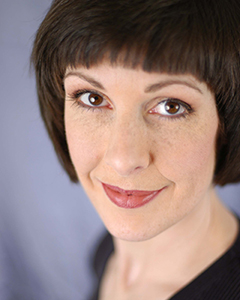 Jill (she, her, hers) is enjoying her second career as a registered nurse after retiring from show business in 2007, but she is thrilled to now make her Playhouse debut. She finds that exposing herself to the vulnerability of live performance, where sheer terror lives, is a great way to unwind from the daily stresses of hospice nursing. Before she retired from musical theatre, she performed in Show Boat on Broadway, as Lola in the national tour of Damn Yankees opposite Jerry Lewis, as Peggy Sawyer in the national tour of 42nd Street, and as Cassie in A Chorus Line, in an unbelievable number of national, European, and international tours and regional productions. Regionally, she also played Rose in Gypsy, Polly in Crazy for You, Woman 2 in And the World Goes ‘Round, Fastrada in Pippin, Miss Sandra in All Shook Up, Miss Adelaide in Guys and Dolls opposite Maurice Hines, Laverne in Sisters of Swing, the title role in Sweet Charity, one of the Cats, the Acrobat in Matilda The Musical, and, most recently, Martha in Irving Berlin’s White Christmas (CMT San Jose Marquee Productions). For a brief moment, she carried a 4.00 GPA as a mechanical and chemical engineering major at the Colorado School of Mines before finally graduating summa cum laude with a BS in nursing from California State University, Monterey Bay. Jill hopes to be the first engineer nurse actor on Mars.