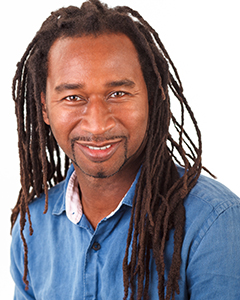 Rene is a multi-disciplinary artist native to the Bay Area who was active during the 1980s and ‘90s. He first received notoriety developing acrobatic and clowning skills in Make*A*Circus and played Antonio in Twelfth Night and Lucius in Julius Caesar with the California Shakespeare Festival. He also played Puck in A Midsummer Night’s Dream (San Francisco Shakespeare Festival) and Chicco the Pirate in Peter Pan and Gratiano in The Merchant of Venice (San Jose Light Opera), the god Enki in Queen of Swords (Theatre Rhinoceros), a role in Down the Dark Well (NOHspace), Sandman in Little Nemo in Slumberland, Andre in Ain’t Misbehavin’ (Oregon Cabaret Festival), and Joseph Johnson in La Sirène, his inaugural production as the new artistic director of California Revels.