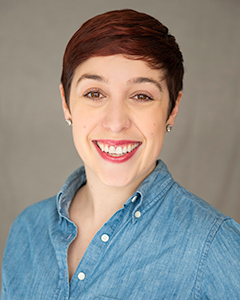 Danielle (she, her, hers) is thrilled to make her Playhouse debut in Follies. Praised for being “magnificent, playful, and nimble” (San Francisco Classical Voice) and “terrifically funny and feisty” (Talkin’ Broadway), she is passionate about both musical theatre and operatic repertoires. Favorite credits include the role of Tess and co-choreographer for Crazy For You and dance captain and an ensemble role in 42nd Street (Bay Area Musicals), soloist for “Somewhere” in West Side Story (Hillbarn Theatre), Frenchy in Grease (Berkeley Playhouse), Frieda Bauer in Pardon My English and Winnie Winslow in No, No, Nanette (42nd Street Moon), Ethel Toffelmier in The Music Man (Broadway by the Bay), and Poppea in L’incoronazione di Poppea (Opera Theatre Unlimited). Favorite operatic roles include those with a comedic touch, such as Carolina in Il matrimonio segreto, Just Jeanette in Too Many Sopranos, and Fräulein Silberklang in Der Schauspieldirektor. daniellecheiken.com