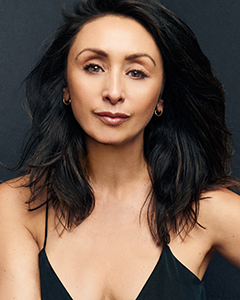 Natascia is a multiple award-winning, critically-acclaimed triple-threat stage and screen actress, widely recognized for her feature in the Broadway documentary film Every Little Step. A native New Yorker, her Broadway and cast album credits include Man of La Mancha, covering and performing the role of Aldonza opposite Brian Stokes Mitchell, and Seussical. Off-Broadway credits include Susan in tick, tick… BOOM! starring with Joey McIntyre of New Kids On The Block and the 2007 revival of Jacques Brel Is Alive and Well and Living in Paris. Dubbed one of top performers in Washington, DC, she holds three Helen Hayes Awards. The first, in a tie with Chita Rivera, for her transformation into Scottish rocker Monica in Rooms. The second for her performance in Jacques Brel Is Alive and Well and Living in Paris, and the third for her “obsessively watchable, gorgeously sung” (Washington Post) role in a “career-defining performance” (BroadwayWorld) as Fosca in Passion by Stephen Sondheim. Other favorite credits include Petra in A Little Night Music and Rosalie in Carnival (Kennedy Center), Rafaella in Grand Hotel (New York City Center), Aurora/Spider Woman in Kiss of the Spider Woman, Jenny in The Threepenny Opera, and Betty #3 in Collective Rage. Catch her in her recurring role on FBI as Detective Cantrell. natasciadiaz.com