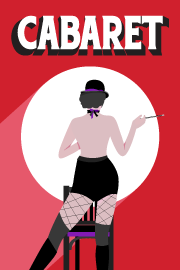 Book by Joe Masteroff; Based on the play by John Van Druten and Stories by Christopher Isherwood; Music by John Kander; Lyrics by Fred Ebb

“Dazzling and timely! Chilling and wildly entertaining any night of the year.” – San Francisco Examiner

“It would be hard to overstate just how good this show is … one of the best productions to ever grace a local stage.” – Talkin’ Broadway

Cliff Bradshaw, an American author working on a novel in pre-WWII Berlin, falls in love with the vivacious Sally Bowles, a singer at the local Kit Kat Klub. Their dream-like romance is tested by the political upheaval that changes their lives dramatically. Even after fifty years, this classic Tony Award-winning musical remains painfully prophetic, reminding us through Sally and the Emcee’s lost souls what horrors humans are capable of, lest we ever forget.

“This musical will make you laugh, gasp, tap your toes, and cry—and remind you to never forget.” – Elaine Elinson, 48 Hills

WOW! WOWIE! “Cabaret” at SF Playhouse is one of those shows you want to tell your friends, family, strangers and everyone that you meet that they have to see this production. – Carol Benet, For All Events

Cate Hayman is perfect for the part of Sally Bowles. – Kedar Adour, For All Events

San Francisco Playhouse, under the superb direction of Susi Damilano and Music Director Dave Dobrusky, does much more than revisit this powerful piece. She and her cast bring every nuance of character to bear as they seduce each other and the audience. – Sally Hogarty, East Bay Times

As powerfully conceived and directed by Susi Damilano, … Cabaret is in every respect even more startling, unsettling, and yes, sensational in 2019. – Eddie Reynolds, Theatre Eddys

John Kander and Fred Ebb (Music and Lyrics): The Kander and Ebb collaboration of four decades has created what many would consider Broadway standards and contemporary classics: THE SCOTTSBORO BOYS (Tony Award Nomination), FLORA, THE RED MENACE, CABARET (Tony Award for Best Musical), THE HAPPY TIME, ZORBA, 70 GIRLS 70, CHICAGO, THE ACT, WOMAN OF THE YEAR (Tony Award for Best Score), THE RINK, KISS OF THE SPIDER WOMAN (Tony Award for Best Score) and STEEL PIER. Their collaboration also transferred itself to movies and television as they wrote original material for the Academy Awards, “Liza with a Z” (Emmy Award for Music and Lyrics), Funny Lady (Oscar nominated for Best Song), Lucky Lady, New York, New York, Stepping Out and Chicago (Oscar nominated for Best Song). In the mid-1980’s the song “New York New York” became the official anthem of New York City. At the time of the unfortunate death of Mr. Ebb, Kander and Ebb had several projects in different stages of completion waiting in the wings including THE VISIT, ALL ABOUT US (a musical adaptation of Thornton Wilder play THE SKIN OF OUR TEETH) and CURTAINS.

Joe Masteroff (Book): Born in 1919 in Philadelphia, he had only one dream from infancy: to write for the theatre. After the essential lonely childhood and four-year stint in the Air Force, he came to New York to face his future: book writer or book seller? Luckily, luck intervened. Before long he had three shows on Broadway bearing his name: The Warm Peninsula starring Julie Harris, and two musicals She Loves Me and Cabaret, for which he was the book writer. Thanks to indulgent parents, the New Dramatists, Hal Prince and many others, he is now retired and living in subdued luxury.