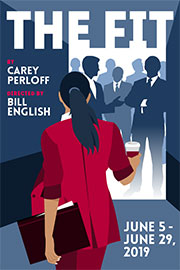 Presented at The Rueff at A.C.T.’s Strand Theater

It’s a fight for survival in the Silicon Valley world of venture capital and Sakina, an Indian-American venture capital associate, has big dreams of financing her idea of a bio-receptive, information-gathering fabric. But will she fit in a place where her values and identity must be compromised for her goal to be realized? Ethics, tribalism, and the intentions of business are tackled as Perloff delves into the shark tank of finance.

* Member of Actors’ Equity Association, the Union of Professional Actors and Stage Managers.

After 26 successful seasons as Artistic Director of American Conservatory Theater, Carey Perloff has resumed her award-winning playwriting career. Her play Kinship premiered at the Theatre de Paris in October 2014 in a production starring Isabelle Adjani and Niels Schneider and was produced at the Williamstown Theater Festival last summer, starring Cynthia Nixon and directed by Jo Bonney. Waiting for the Flood has received workshops at A.C.T, New York Stage and Film, and Roundabout Theatre. Higher was developed at New York Stage and Film, won the 2011 Blanche and Irving Laurie Foundation Theatre Visions Fund Award, and received its world premiere in February 2012 in San Francisco Luminescence Dating premiered in New York at The Ensemble Studio Theatre, was coproduced by A.C.T. and Magic Theatre, and is published by Dramatists Play Service. The Colossus of Rhodes was workshopped at the O’Neill National Playwrights Conference, premiered at Lucille Lortel’s White Barn Theatre, and was produced at A.C.T. in 2003. Her newest play, Bastiano Or The Transfiguration of Raffi, was written on a Bogliasco Foundation Fellowship and recently received a Rough Reading with the Bay Area Playwrights Foundation, directed by Tony Taccone.