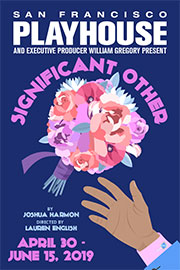 “Tender and hilarious … This play is so deeply satisfying, even at times cathartic.” – San Francisco Examiner

“Achieves what the best rom-coms achieve .. you don’t just emotionally identify with characters; you feel a kind of adoring affection for them.” – San Francisco Chronicle

Jordan Berman is looking for his own “Mr. Right.” Nothing is more important to him than his close group of girlfriends; but as they get married one by one, he is left to wonder why life won’t give him the same fairytale ending. Significant Other is an unorthodox romantic comedy from award-winning playwright Joshua Harmon (Bad Jews, Admissions) that celebrates the highs and lows of twentysomething urban life—wedding after wedding after wedding.