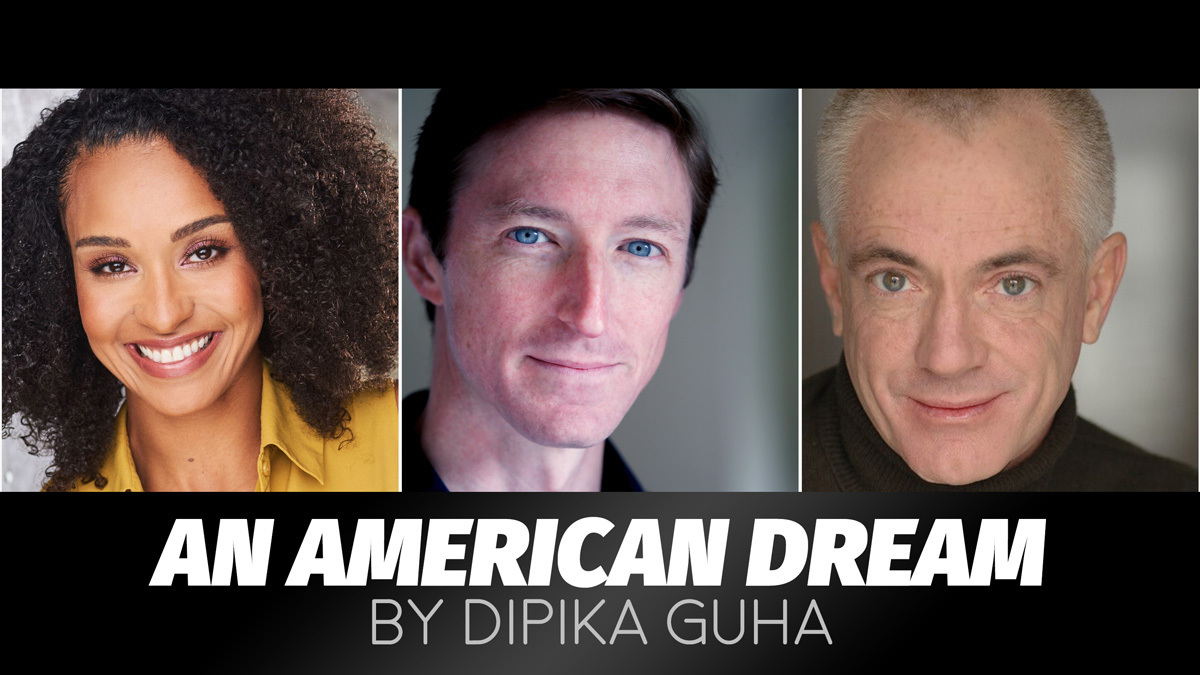 When he falls in love at first sight with a woman he sees at Venice Beach, Seb’s world turnsupside down. An American Dream is a contemporary verse comedy inspired by T. S. Eliot’s The Wasteland and Shakespeare’s Twelfth Night.

Dipika Guha
Dipika Guha was born in Calcutta & raised in South India, Russia and the United Kingdom. Her plays include Yoga Play (South Coast Rep, Moxie Theatre & SF Playhouse), The Art of Gaman (Theatre 503 London, Relentless Award semifinalist) and Unreliable (Upcoming: Kansas City Rep). Recent works includes Azaan, a play for for Oregon Symphony Orchestra, In Braunau for Playwrights Horizons Theatre School, contributions to You Across From Me (Humana, Actors Theatre of Louisville) and Elizabeth for the McCarter Theatre’s Princeton and Slavery Project. Dipika’s current commissions include South Coast Rep, Manhattan Theatre Club/Sloan, Barrington Stage and Oregon Shakespeare Festival. She was a Hodder Fellow at the Lewis Center for the Arts at Princeton University, the inaugural Shakespeare’s Sister Playwriting Fellow with the Lark Play Development Center, A Room of Her Own and Hedgebrook and is a current Venturous Fellow for her play Passing. Dipika earned her undergraduate degree at University College London, a Frank Knox Fellowship from Harvard University and an M.F.A from the Yale School of Drama under Paula Vogel. For television she’s written for American Gods, Paradise Lost, Sneaky Pete and is currently writing for Rainy Day People at AMC.

Tom Ross
Tom Ross inaugurated Berkeley’s Aurora Theatre Company with Barbara Oliver in 1992 and served as Managing Director for its first 12 years. In 2004, Tom became Artistic Director and held that position for 15 years, stepping down last year. While there, he oversaw both Aurora’s move to Addison Street and the expansion into the Dashow Wing.  He created the new play initiatives, The Global Age Project and Originate+Generate as well as the second performance space, Harry’s Upstage.  He directed 30 productions for the company. Additionally, Tom wrote and directed the long running A Karen Carpenter Christmas and did the book adaptation of the Joe Orton/Todd Rundgren musical Up Against It!  For 8 seasons, he was a producer of SF’s legendary Solo Mio Festival. Before moving to the Bay Area, Tom worked 8 years at NY’s Public Theater, first as Executive Assistant to Joseph Papp and then Co-director of Play and Musical Development.

Tristan Cunningham as Olivia
Tristan Cunningham “turns in a tour de force of portraits” as quoted by the San Francisco Chronicle. “Cunningham steps so fully into each character that with each snap of a transformation you hold your breath, as if observing a magic trick”, SFGate. She has won the 2016 TBA Outstanding Performance Award and the 2016 BATCC Excellence in Theater Award. Her Bay Area credits include: California Shakespeare Theater, Aurora Theater, SF Playhouse, Marin Shakespeare Company and more. Most recently she was in Season 1 of All Rise on CBS, and she will be in Season 1 of The Fugitive starring Kiefer Sutherland on Quibi TV. She is also featured in television shows Lethal Weapon, Solve, and Bit.

Joseph Patrick O’Malley as Sebastian
Joseph is a member of Actor’s Equity and SAG-AFTRA, having most recently appeared on stage in Cal Shakes’ Macbeth, Marin Shakespeare Co.’s Spamalot! and Aurora Theatre Co.’s Creditors, as well as Magic Theatre’s Virgin Play Festival (Joshua Harmon’s Prayer for the French Republic). During COVID-19, in Playground’s Best of Playground – Zoom Fest, as a motion capture artist for 2k Studios/Take-Two Interactive and an independent content creator for Wish. He holds an MFA in Acting from USC and a BA in Theatre Arts from Santa Clara University. His film brief. was an official selection of the 2017 Napa Valley Film Festival and is available on Vimeo.