The Paper Dreams of Harry Chin by Jessica Huang 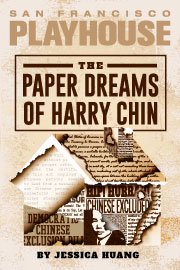 The Paper Dreams of Harry Chin

“The Paper Dreams of Harry Chin is must-see theatre at its finest.”  – Broadway World

Based on a true story. During the Chinese Exclusion Act, Harry Chin, a Chinese national, entered the U.S. by buying forged documentation. Like other “Paper Sons,” Harry lived the rest of his life keeping secrets – even from his daughter. Told through the eyes of a middle-aged Chin, The Paper Dreams of Harry Chin reveals the complicated loves and regrets of this Chinese immigrant. Through dreamlike leaps of time and space and with the powerful assistance of ghosts, the story of the Chin family reveals the personal and political repercussions of making a group of people “illegal.”

Jessica Huang is a playwright based in New York, from Minnesota. Her work has been commissioned by Audible, History Theater, Manhattan Theatre Club, Mixed Blood Theatre, Timeline Theater, Theater Masters and Theater Mu, and includes The Paper Dreams of Harry Chin (Barry and Bernice Stavis Award, Kilroy’s List), Mother of Exiles (Rosa Parks Playwriting Award, Paul Stephen Lim Playwriting Award, Kendeda Prize Finalist), Transmissions in Advance of the Second Great Dying, and Purple Cloud. She has been a member of the Civilians R&D Group, Page 73’s Interstate 73 and Ars Nova Play Group, and has had fellowships at the Playwrights’ Center and McDowell. She is a graduate of the Playwrights Program at Juilliard. More: Jessica-Huang.com