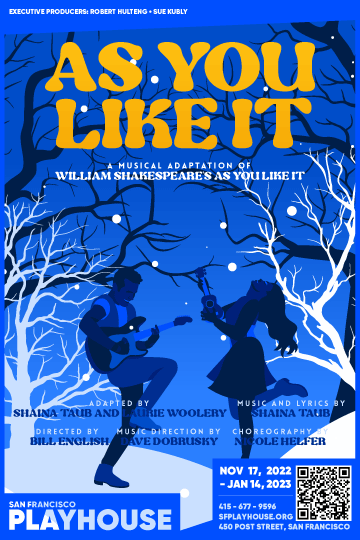 A musical adaptation of William Shakespeare’s As You Like It

“Utterly delightful! This production is a pleasure from start to finish.” – East Bay Times

“A celebration of love … performed by the cast with so much humor and heart.” – The Mercury News

Shaina Taub and Laurie Woolery’s rollicking and poignant musical adaptation of Shakespeare’s As You Like It is a dream-like tale of faithful friends, feuding families and lovers in disguise, featuring an original folk-pop score. Forced from their homes, Orlando, Duke Senior, his daughter Rosalind, and niece Celia escape to the Forest of Arden, a fantastical place of transformation, where all are welcomed and embraced. Lost amidst the trees, the refugees find community and acceptance under the stars.

SHAINA TAUB
Raised in the green mountains of Vermont, Shaina Taub is a New York-based songwriter and performer. She has the won the Jonathan Larson Grant, the Fred Ebb Award and the Billie Burke Ziegfeld Award and has an ongoing concert residency at Joe’s Pub. Taub has starred in her musical adaptations of Shakespeare’s Twelfth Night and As You Like It at the Public Theater’s Delacorte in Central Park, commissioned for their groundbreaking Public Works initiative. She’s currently writing a musical about the American women’s suffrage movement and she’s writing lyrics for the upcoming musical of The Devil Wears Prada, with music by Sir Elton John. Taub’s work was featured in Lincoln Center’s American Songbook concert series and she recently made her Carnegie Hall debut performing her music with the New York Pops. She wrote songs for and co-starred in Bill Irwin and David Shiner’s Old Hats, directed by Tina Landau at the Signature Theatre and A.C.T. She earned a Lucille Lortel Award nomination as Mary in the off-Broadway run of Natasha, Pierre & The Great Comet of 1812, and appeared in the original cast of Hadestown at New York Theatre Workshop. Her songs have been performed by Audra McDonald and Sutton Foster, and she wrote the theme song for Julie Andrews’ Netflix series Julie’s Greenroom, performed by Sara Bareilles. Her two albums, Visitors and Die Happy are available at www.shainataub.com.

LAURIE WOOLERY
Laurie Woolery is a latine director, playwright, community activist and citizen artist who is works at the intersection of art, civic engagement, and radical inclusion. She is the Director of Public Works at The Public Theater, a program that seeks to engage the people of New York by making them creators and not just spectators. For the Public Theater, she co-created and directed As You Like It, The Tempest and TROY. Other directing credits include Promenade (Encores! Off-Center), Manahatta by Mary Kathryn Nagle (OSF/Yale Rep), El Huracán by Charise Castro Smith (Yale Rep), The Tenth Muse by Tanya Saracho (OSF), Electricidad by Luis Alfaro (CTG), Dream Hou$e by Eliana Pipes (Alliance, Long Wharf, Baltimore Stage) Imogen Says Nothing by Aditi Kapil (Yale Rep) to name a few. She produced the documentary Under the Greenwood Tree and curated the national public art project The Seed Project.  Laurie is a founding member of The Sol Project, and a proud recipient of the Fuller Road Fellowship for Women Directors of Color, a 2020 United States Artist recipient and the 2021 Americans for the Arts Johnson Fellowship for Artists Transforming Communities. www.lauriewoolery.com