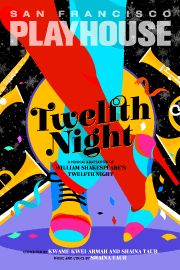 Twelfth Night is a rousing contemporary musical adaptation of Shakespeare’s classic romantic comedy about mistaken identity and self-discovery. On the twelfth day of Christmas, shipwrecked Viola washes up on the shores of Illyria, disguises herself as a man, is sent to court a countess and falls hard for a Duke. As she navigates the gender confusion in all her roles, she finds her true self and true love in the process. Featuring an original jazz-funk score by Shaina Taub, Twelfth Night is a soulful shake-up of a Shakespearean classic, perfect for the 12th night of Christmas or any day of the year.

MUSIC …AND THE FOOD OF LOVE

First performed on the Feast of the Epiphany, Twelfth Night marked a day when accepted ranks and relationships could be turned upside down, with masters serving servants and the court fool playing the queen or king. Shakespeare’s Twelfth Night, with its subtitle, Or, What You Will (i.e. “as you imagine you are,” or “as I want to see you”), fits perfectly with this day of “upside-down” relationships: again and again its characters emerge in a topsy-turvy way, adopting alternate roles, genders, and relationships that puzzle others (and sometimes themselves)… [Read more from the Twelfth Night dramaturgy team]