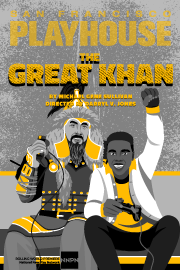 “[A] brilliant new play … The Great Khan is far more than entertainment. It’s a view of history and culture and humanity that would be incredibly important at any point in time, but is especially important now” – Talkin’ Broadway

A provocative and comedically brilliant new play from the San Francisco Mime Troupe’s resident playwright Michael Gene Sullivan. Jayden just wants to be his game-playing, nerdy self. But after he saves a girl, Ant, from being assaulted, he and his mother are forced to move to keep him safe. While Jayden debates whether he should toughen up, Ant tries to reject the tough persona she has adopted. Both are trying to figure out how to define themselves — and then Genghis Khan shows up. The Great Khan is a National New Play Network rolling world premiere.

Content Advisory
Please be advised that this play touches on themes of sexual assault, violence, and racism, and features some colorful language. We invite audience members young and old to let this play ignite conversations and embrace the opportunity to learn. Click here for a list of resources.

Michael Gene Sullivan is award-winning playwright, director, and actor based in San Francisco. Michael’s plays have been produced and performed at theaters throughout the United States, and in Greece, England, Scotland, Spain, Columbia, Ukraine, The Netherlands, Argentina, Canada, Mexico, as well as at the Melbourne International Arts Festival (Australia), the International Festival of Verbal Art (Berlin), The Spoleto Festival, (Italy), and The Hong Kong Arts Festival.

Michael is Resident Playwright for the Tony and OBIE award-winning (and despite its name never, ever silent) San Francisco Mime Troupe, where he has written or co-written over 20 plays, including Tales of the Resistance, Freedomland, Schooled, Red State, Posibilidad, Making A Killing, and 1600 Transylvania Avenue. He was also a Resident Playwright for the Playwrights Foundation, and was awarded a 2017 artist residency at the Djerassi Arts Center. Michael’s non-Mime Troupe plays include the award-winning all-woman political farce Recipe, A Red Carol, his critically-acclaimed one person show, Did Anyone Ever Tell You-You Look Like Huey P. Newton?, and his stage adaptation of George Orwell’s 1984, which opened at Los Angeles’ Actors’ Gang Theatre under the direction of Academy Award winning actor Tim Robbins. 1984 has since been produced nationally (most recently at the Alley Theatre in Houston and national tour with New York’s Aquila Theatre) and in 14 countries around the world, translated into 5 languages, and is published in the United States, Canada, and Spain. www.michaelgenesullivan.com