From The Empathy Gym | The First Story

A group of ancient humans sit huddled around the fire, hunkered down in a shallow cave so the rain doesn’t put the fire out, the sound of distant wolves and other creatures of the night echoing off the cliffs around them. They are eating fresh kill, an elk-like animal that was brought in by their hunters earlier in the day. Since they’ve eaten nothing but grubs and thistles in over a week, the meat is welcome. Savoring it silently, they listen for danger with alert eyes, for besides the animal predators there are roving bands of humans who specialize in theft and murder. The snow is coming soon and with it, the fear that some will die of hunger and cold if they can’t find food shelter.

The elk has been skinned and the meat set out to dry by the fire, the skin stretched between some branches, the sinew being spun into gut rope. One man who is not working on the kill sits on his haunches at the mouth of the cave, his back warmed by the fire, his chest chilled by the cold. He stares at the rain. Suddenly, he lets out a fierce howl of rage at the rain and wind, at whatever is out there to threaten his people. He leaps up, and pounding his chest, dances, slamming his feet into the dirt. Spinning recklessly around, banging a stick on the walls of the cave, he continues to yowl at the top of his lungs. Then suddenly, in an electric move, he spins back to the group, his face and his headdress of ram’s horns brilliantly lit by the fire. 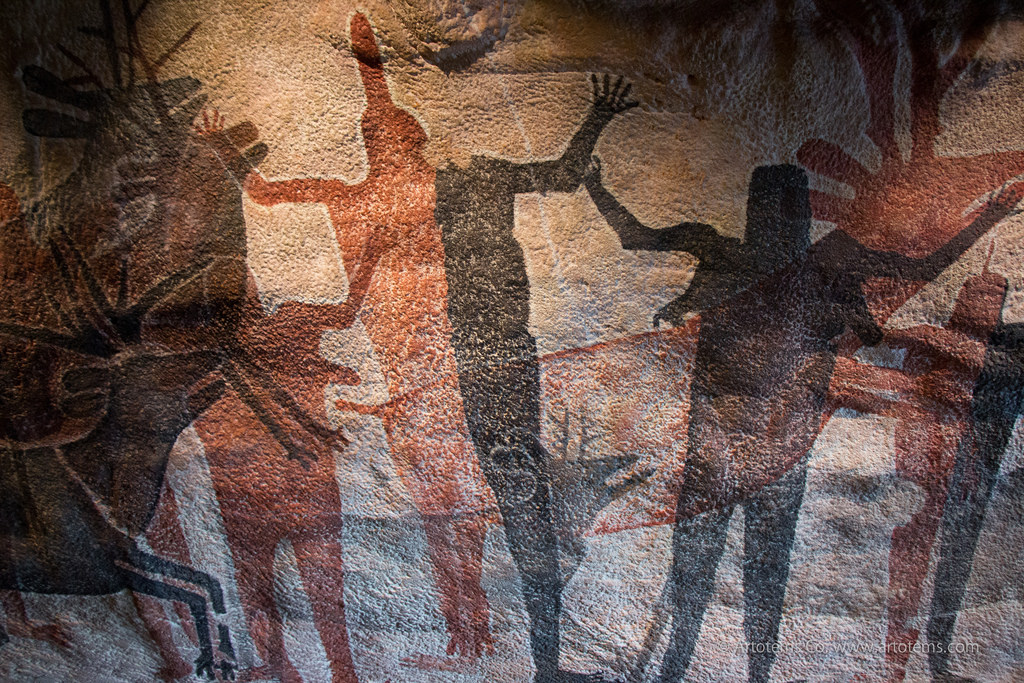 “Then suddenly, in an electric move, he spins back to the group, his face and his headdress of ram’s horns brilliantly lit by the fire. He tells the saga of Ergen, the hunter.”

He tells the saga of Ergen, the hunter. He was with Ergen as they went out to search for game. They walked for days, their primitive spears having little impact on the animals they did encounter. But brave Ergen climbed a tree and waited stealthily for some beast to pass, underneath. And when an elk paused under the tree, he leapt onto its back. The animal reared, twisting and leaping to shake him off but the heroic Ergen, holding firm to the Elk’s antlers would not be dislodged. The beast fought hard to throw its assailant or impale him on his antlers, but Ergen took his bone knife and holding on with one hand, began stabbing the elk in the neck. After some hundreds of yards, with his fellow huntsmen in pursuit, Ergen finally wrestled the mortally wounded animal to the forest floor where he and his elated hunters finished the kill.

The huddled group in the cave gasped in awe at this great feat. But what the listeners didn’t know was that the storyteller had fabricated his yarn out of thin air. In reality, the hunters had stumbled into the presence of a big cat who had killed the elk and was about to dine. And as they made a huge din of noise and gestures, the cat decided it wasn’t worth the trouble to have to kill them too and wandered off in search of a meal with fewer hassles. But our shaman’s passion, his admiration for Ergen’s achievement, his skill in acting out the details of the kill were so profound, so convincing, that either no one suspected a hoax or they willingly suspended their disbelief. And as our storyteller spun his yarn, the faces of his audience begin to light up, inspired by Ergen’s superhuman cunning and courage. If he could do such an incredible thing, perhaps they too could summon the will to face the night. If one of their ordinary lot could master the giant elk, they too could survive and perhaps thrive.

Humans need four elements to survive. Food, shelter, purposeful activity. And stories. Especially the stories we tell together, live, in a group, in a community we make called theatre. The shaman telling Ergen’s story cannot help himself. He knows the people need to be lifted up. And he must do it. He cannot bear the fear and grief, the desolate loneliness around him and so he acts. Without guilt about the lie because he knows a greater truth lies underneath, that his fiction serves a finer purpose. Our playwrights today are similarly compelled to speak. They, like their ancient forebears, cannot sit silent in the face of our loneliness, our fear, our confusion. I think most playwrights have no choice but to write. It is a calling that they must answer and so, like the ancient storyteller, they spin the straw of mundane experience into the gold of deeper truth.

And they do it when we are gathered together in our modern cave, our theatre, lit brilliantly by our amazing electric fires, our actor sha-men and sha-women spinning tales to help us make sense of our crazy world and our fearful selves. Like the playwright, the actors also cannot help themselves, cannot stand by and watch us suffer. They too must speak out. Theatre must surely be the oldest of the arts, embedded in our DNA. We crave stories that illuminate, that shine a bright light on what we share, that help us see, help us heal, lift our hearts, give us hope. Only theatre does it live, as we always have, our community, our tribe, as we come together to hear, and see, and think, and feel.

In Plato’s “Republic” there is the famous chapter “The Cave.” There have been many interpretations of this chapter, from philosophic to political, but I never though about the Cave in terms of theater–Plato being well aware of the plays written and performed in Athens at that time. Your post made me think that theater was also on his mind when he wrote the “Republic,” and I thank you for that.