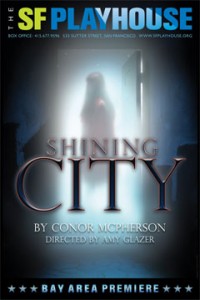 Shining City opened on Broadway in 2006 where it received two Tony Award nominations, including Best Play and prompted the London Telegraph to describe Conor McPherson as ‘the finest dramatist of his generation…’. Set in present-day Dublin a man seeks help from a counselor, claiming to have seen the ghost of his recently deceased wife. However, what begins as just an unusual encounter becomes a struggle between the living and dead-a struggle that will shape and define both men for the rest of their lives. In this contemporary ghost story, Conor McPherson explores what it means to lose faith-in God, in relationships and in one’s self.
Read the Press Release