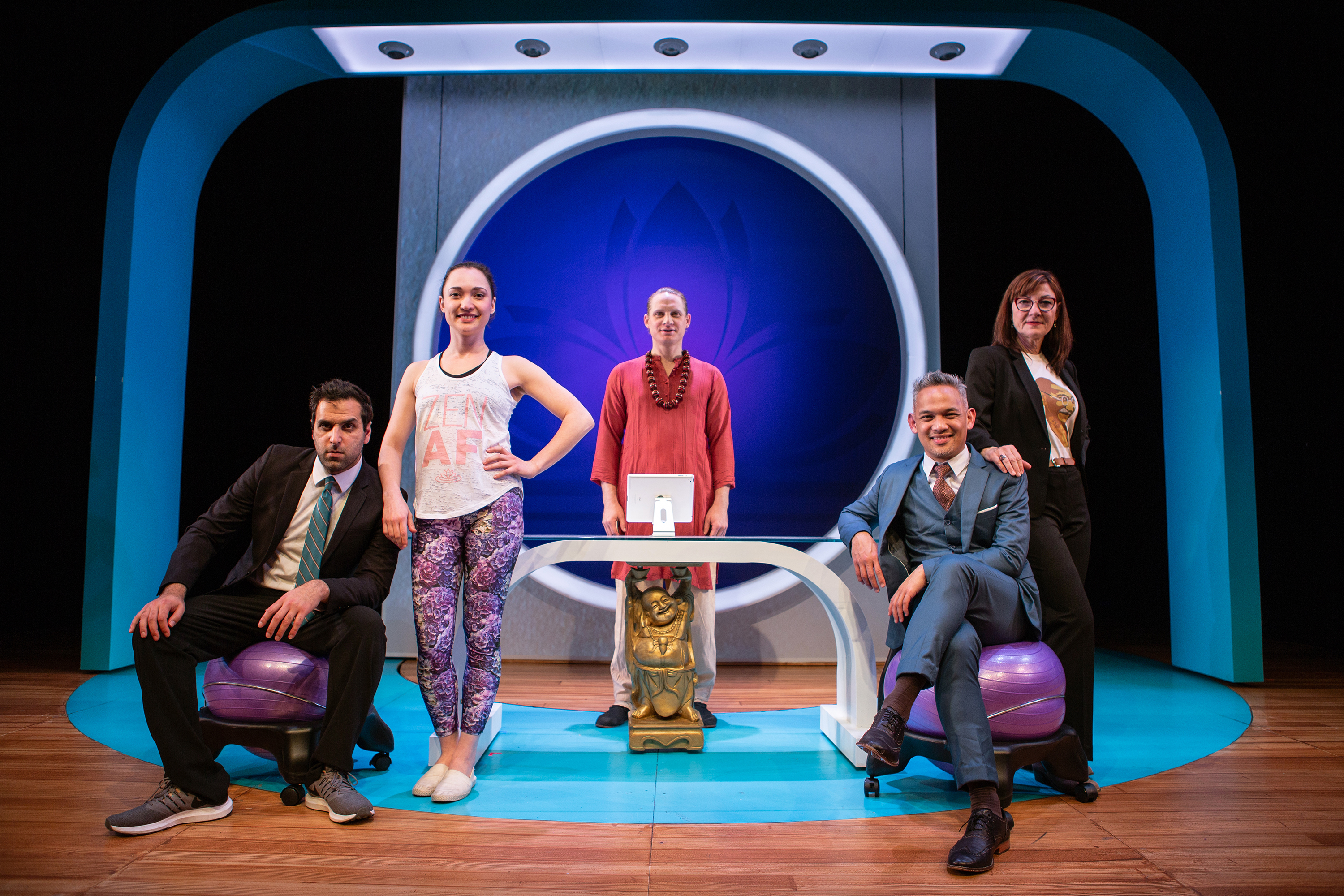 “Yoga Play resonated with Bay Area audiences who not only responded to its humor and passion but most especially understood the mirror it held up to contemporary society,” said Bill English, Artistic Director of San Francisco Playhouse. “We were honored that Laguna Playhouse wanted to share our production with Southern California audiences, who we expect will have a similar response. We couldn’t be more excited to bring this hysterically funny and spiritually deep work to Orange County.”

At the top of their game, yoga apparel giant Jojomon is hit with a terrible scandal that sends them into freefall. Desperate to recover their earnings and reputation, newly hired CEO Joan stakes everything on an unlikely plan. Yoga Play is a comedic journey towards enlightenment in a world determined to sell it.

Dipika Guha (Playwright) was born in Calcutta & raised in South India, Russia and the United Kingdom. Her plays include Yoga Play (South Coast Rep, Moxie Theatre & SF Playhouse), The Art of Gaman (Theatre 503 London, Relentless Award semifinalist) and Unreliable (Upcoming: Kansas City Rep). Recent works includes Azaan, a play for Oregon Symphony Orchestra, In Braunau for Playwrights Horizons Theatre School (also presented as a world premiere as part of the San Francisco Playhouse 2017-2018 “Sandbox Series”), contributions to You Across From Me (Humana, Actors Theatre of Louisville) and Elizabeth for the McCarter Theatre’s Princeton and Slavery Project. Dipika’s current commissions include South Coast Rep, Manhattan Theatre Club/Sloan, Barrington Stage and Oregon Shakespeare Festival. She was a Hodder Fellow at the Lewis Center for the Arts at Princeton University, the inaugural Shakespeare’s Sister Playwriting Fellow with the Lark Play Development Center, A Room of Her Own and Hedgebrook and is a current Venturous Fellow for her play Passing. Dipika earned her undergraduate degree at University College London, a Frank Knox Fellowship from Harvard University and an M.F.A from the Yale School of Drama under Paula Vogel. For television she’s written for American Gods, Paradise Lost, Sneaky Pete and is currently writing for Rainy Day People at AMC.

Bill English (Director) is a co-founder and Artistic Director of San Francisco Playhouse, and in sixteen years with Susi Damilano, has guided its growth from a bare-bones storefront to the second-largest theatre in San Francisco. He designed the first theatre space at 536 Sutter Street and personally reconfigured a barn-like 700-seat hall to the currently gracious and intimate 199-seat venue. Along the way he has served as director, actor, set and sound designer, winning San Francisco Bay Area Theatre Critics Circle nominations or awards in all those categories. Bill is also an accomplished musician and builder. Milestone accomplishments include bringing Pulitzer Prize-winner Stephen Adly Guirgis to the Bay Area by directing three of his plays, commissioning twelve playwrights including Theresa Rebeck, Aaron Loeb, Lauren Gunderson, Lauren Yee, and Christopher Chen, and developing world premieres from workshops to “Sandbox Series” to the Playhouse main stage to Off-Broadway (including the New York productions of Ideation and Bauer), and presenting the very first production of Grounded by George Brant which later played at the Public Theatre. He coined the phrase “the empathy gym” and it drives everything at the Playhouse.