On Sunday, March 29th, we announced our 2020/21 Season with our first ever live streaming Virtual Season Announcement Party.

After months of research and preparation, Artistic Director Bill English, Producing Director Susi Damilano, the Playhouse staff, and a star-studded lineup of artists came together and announced five of the six plays that will comprise our 2020/21 Mainstage Season.

For an hour, online, it felt as though the Playhouse spirit was truly alive in all our houses. From San Francisco across to New York City, our Empathy Gym was open — and it felt wonderful. Over 200 households tuned in on Youtube to watch the season reveal. In these dark times, our community truly came through, connected by the hope for brighter days ahead.

After Bill English and Susi Damilano kicked off the party, they introduced the first of a dynamite group of special guests and core friends of the Playhouse: Daveed Diggs. Now a renowned Tony-winning Broadway artist and filmmaker, Daveed shared his personal connection to the Playhouse with us: it was the starting ground that launched his acting career. It was refreshing and empowering to hear Daveed Diggs tell the world: “they [the Playhouse] make good shit—help them continue to make good shit”.

Next, the the incendiary Dean Linnard sang a beautiful rendition of “You’ve Got Possibilities” from the 1966 musical It’s a Bird… It’s a Plane… It’s Superman. Dean recently graced our stage as Ned Ryerson in our holiday musical Groundhog Day, and is sure to be a longtime favorite on Bay Area stages. 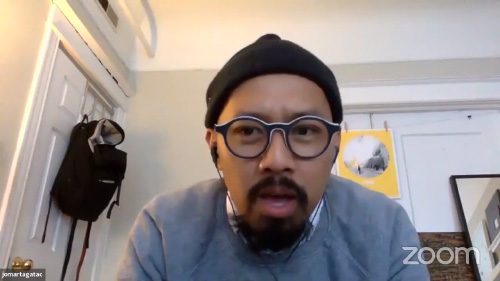 Dean was followed by renowned actor Jomar Tagatac, who reminisced about his first job at the Playhouse ten years ago, 2010’s First Person Shooter. Jomar recently starred in the San Francisco Playhouse productions Tiny Beautiful Things, You Mean to Do Me Harm, and King of the Yees (in an unforgettable turn as the infamous Shrimp Boy, among other roles).

Then Margo Hall uplifted all of us. A sheer creative force, Margo Hall has acted in and directed many productions at the Playhouse. She announced that she will direct the 20/21 Playhouse production of American Son by Christopher Demos-Brown.

Up next in the livestream: the original San Francisco Playhouse couple, Monique Hafen Adams and Jeffrey Brian Adams. They shared a wonderful performance of “Move On” from Stephen Sondheim’s Sunday in the Park with George as well as some happy news: they’re expecting an addition to their beautiful little family.

After Monique and Jeffrey’s performance, the inimitable Carl Lumbly took the stage. Reflecting on past challenges, Carl offered his own, deeply personal words of wisdom and hope during these troubled times, and emphasized the importance of the Playhouse’s work as a Bay Area creative staple. 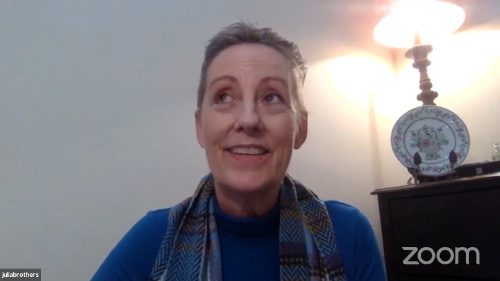 Julia Brothers has starred in the San Francisco Playhouse productions of “Abigail’s Party,” “The Roommate,” and “Dance Nation.”

The evening’s final guest, Julia Brothers, is a warrior through and through. She shared stories of her own personal struggle with the coronavirus, and uplifted us with her words of courage and passion. For a moment it really felt as though we were all in one room together.

This season announcement was an extraordinary one. And the live chatter on YouTube during the event was so encouraging and positive that we have already received requests to make this a new, reinvented tradition. It was very moving to see the community show up for us during this strange time. We can’t wait to be there for you again, during the brighter days ahead.