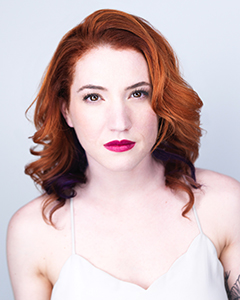 Malka Wallick (she, her, hers) is thrilled to be making her Playhouse and Bay Area debut with Indecent. A NYC based multi-hyphenate creative, Malka’s work is about the intersection of the Jewish, Queer, and feminist experiences. Selected Theatre: Outer Banks (Signature Theatre, NYC); Viola in Twelfth Night (STNJ); Juliet in Romeo and Juliet, The Angel of Allegheny County (Playhouse on Park). She produced and starred in the short film klutz. with her film company Girl Gang Production(s). klutz. premiered at the Oscar Qualifying festival Dances with Films (LA) and has screened at multiple festivals since — including the Northeast Film Festival — where she was nominated for Best Actor for her performance. Her TV pilot Our Bodies & Other Shames has placed in multiple screenwriting competitions. Web Series: Work Study. Film: Bachelorette, Bachelorette. Training: Sarah Lawrence College, The Royal Academy of Dramatic Art (MA Theatre Lab).  malkawallick.com & @mawallick