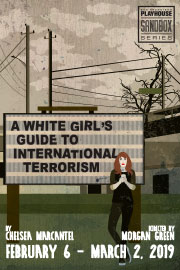 Presented at The Creativity Theater

“Brought to life by a terrific cast.” – Mercury News

Blaze is angry, and with good reason. She’s getting kicked out of her mom’s trailer park in the drug addled Gulf Coast of Louisiana, where part time work at the Dairy Freeze is the most she has to look forward to. That is, until her YouTube channel attracts a mysterious commenter whose words point to a brighter alternative, one that is a dangerous Google search away from unfathomable consequences. A White Girl’s Guide to International Terrorism is the fictionalized epic of a hidden reality in post 9/11 America, where poverty is the battle and misinformation is the weapon.

Chelsea Marcantel is an LA-based writer, director, and collaborator. Reared by Cajuns in southwest Louisiana, Chelsea has lived and made theatre among the tribes of the Midwest, Appalachia, the Mid-Atlantic, and now the West Coast. In 2016, she completed a Lila Acheson Wallace American Playwrights Fellowship at The Juilliard School. Her plays include Airness, Everything is Wonderful, Ladyish, Devour, and Tiny Houses. They have been produced around the United States and Canada (and Chelsea is vigorously working on becoming a sensation abroad as well).