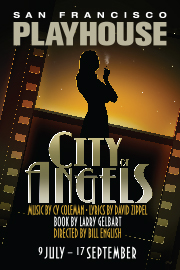 “‘City of Angels’ works on every level” – San Francisco Examiner

“This production is a grand triumph for the folks at San Francisco Playhouse; the kind of theatrical experience you’ll definitely want to see more than once.” – My Cultural Landscape

“It is film noir satire at its best.” – For All Events

“This is an extremely clever, and very funny musical – with just enough intrigue to keep your mind on the hop throughout. It’s a good old-fashioned, marvelously entertaining piece of theater. You won’t want to miss it!” – Preview

“This is likely one of the best productions ever put on by the San Francisco Playhouse.” – Progressive Pulse

“This is a company that annually knows how to bring back a musical from the past, pump it with new pizzazz, and let it spread its summer sunshine, no matter how foggy August becomes.” – Theater Eddys

“****… We are fortunate that after a twenty-five year absence from our city by the Bay, it is the San Francisco Playhouse that is staging a revival” – Theaterstorm

“If this production is any indication, San Francisco Playhouse’s upcoming season is not to be missed.” – SF Splash

“Impeccably staged, absolutely spectacular, City of Angels brings you the Broadway-level entertainment in a cozy setting of a local theater” – Joliegazette