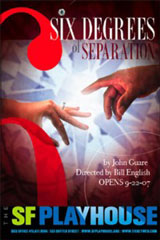 We have all heard the phrase, now you can see where it originated! Inspired by an actual incident—a young African-American man gained access to the homes of upper-class New Yorkers by pretending to be the son of actor Sidney Poitier, Six Degrees of Separation is a witty, biting, yet ultimately sincere commentary on what drives people: the desire for money, fame, social standing, comfort, and, for the lucky, a desire for meaningful human connection. Read the Press Release 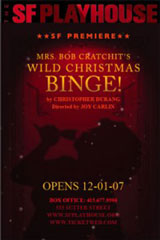 Mrs. Bob Cratchit’s Wild Christmas Binge is a playful, cracked look at the perennial Dickens Christmas classic about mean Ebenezer Scrooge and his discovering the true meaning of Christmas through the visitation of Three Ghosts. In Durang’s giddy version, the Ghost’s magic is off, and Scrooge and the Ghost keep showing up at Bob Cratchit’s house way too early, where Mrs. Bob Cratchit – a long suffering saint in the Dickens – is in a state of fury, hating her life and planning on getting drunk and jumping off the London Bridge. Read the Press Release 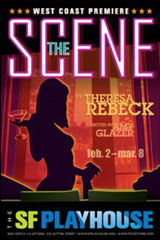 Theresa Rebeck’s The Scene, a thoroughly modern, sharply written black comedy, was the scene-stealer at the 2006 Humana Theater Festival. It is full of people in ‘the scene,’ on ‘the scene’ and desperate for ‘the scene.’ If you have ever done something despite your better judgment, maybe chose to follow the crowd instead of following your gut to avoid hard, emotionally painful work, then you will understand Charlie, the provocative and complex protagonist in this fierce, edgy, raw and scathing new comedy.
Inspired by Rebeck’s occasional forays in the Manhattan party circuit, her run-ins with celebrities six-stories high, and poignant, self-revelatory films like Of Human Bondage and Blue Angel, the play starts out sickly funny and turns darker and darker the further Charlie goes down the road. Like a good Chekhovian drama, the play showcases the humor and tragedy of everyday life. Its biting satire echoes Molière’s ruthless comedic attention to detail, and like a satisfying Greek tragedy, the piece mines humanities brutality examining how self-loathing can move from the world and into the self. “Human beings range from saints to monsters, and for me, you’re constantly being challenged as to where you’re going to fall on that continuum. What choices are you going to make? Which direction are you going to go in?” Rebeck asks.
We are living in difficult times, according to Rebeck, and it’s easy to be confused about what it means to be a human being in this world. For those, like Charlie, struggling to make sense of the world the play is a reminder that the journey can be funny as well as terrifying.
Daphne ZunigaThe SF Playhouse is thrilled to welcome Daphne Zuniga* of Melrose Place and Spaceballs fame to their stage. She will be joined by Aaron Davidman*, Heather Gordon and Howard Swain*.
*Appear courtesy of Actors Equity. Read the Press Release

written and performed by Richard Louis James
Sundays in July and August at 2:30pm, 2008

Back by popular demand, Richard Louis James, returns each Sunday in July and August to the SF Playhouse as the notorious Quentin Crisp in his one-man show Tea ‘N Crisp.
Tea ‘N Crisp, isbased on the writings and public appearances which made this Stately Homo of England a beloved and cherished spirit in the hearts of the LGBT and straight community.
This being the Centenary year of Quentin Crisp’s birth, born December 25, 1908, (a day Quentin professed having to share with another famous person) the San Francisco Playhouse is proud to present the S.F. debut of Tea ‘N Crisp. A pioneer of individuality, predating Stonewall by decades, Quentin Crisp minced about the streets of London adorned with henna hair, lipstick and jungle red toenails blazing through open toed sandals and held court in the cafes of the Chelsea district dispensing his wit and wisdom. Without compromise he stayed true to his own individual style even though he endured bodily harm, ridicule and narrowly escaped prison on false charges of solicitation. Unable to gain suitable employment in the mainstream workplace he stumbled upon a civil servant job, an artist’s model, where he would remain for several decades. Chronicling his experiences up to post World War II England he wrote his autobiography, The Naked Civil Servant, although he preferred to call his life story I Reign In Hell because as he put it: “Mr. Milton recounts how Satan (who Mr. Crisp attests was his only role model) had said ‘better to reign in Hell than to serve in Heaven.’ which he says is what he had done. “I reigned in the exciting Hell of Soho instead of serving in the boring Heaven of Kensington.” In his sixties The Naked Civil Servant was made into a movie for television starring John Hurt and a gay superstar was born. Late in life when most people decide to go into a nursing home he moved to his beloved Manhattan and the rest of Quentin’s life, living to ninety-one, was filled with much sought after public appearances, writings and lectures. Mr. James has carefully woven this incredible icon’s life experience into a performance of profound depth laced with Quentin Crisp’s unmistakable humor. Enjoy Sunday Tea with Quentin Crisp. 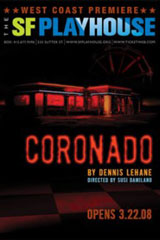 Coronado, a thriller from the pen of Dennis Lehane, author of “Mystic River” on which Clint Eastwood’s film by the same name was based is a film-noir ride through the lives and passions of Middle Americans. Complete with shady characters, sex and murder. Coronado taps into that unsettling place where the familiar turns eerie as it explores our connection to our past and future selves. Read the Press Release 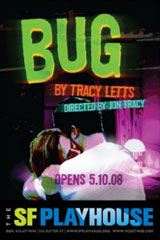 Walk on the wild side with Tracy Letts’ BUG, a Bay Area premiere from the author of Killer Joe and current Broadway darling August: Osage County, comes a psychological thriller about love, fear . . . and little tiny bugs. This play will seduce you and get under your skin. Scratch the itch – don’t miss it! Read the Press Release 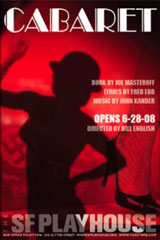 “No good is sitting alone in your room, come hear the music play!” John Kander and Fred Ebb’s legendary landmark musical turns Weimar Berlin of 1931 into a dark and sexually charged haven of decadence where its extraordinary and morally ambiguous inhabitants are determined to keep up appearances as the real world-outside the comfortable sanctuary of the cabaret- prepares for the nightmarish chaos of war. It is here that Sally Bowles performs nightly at the infamous Kit-Kat Klub in “a shimmering masterpiece of a show guaranteed night after night. Its divine decadence darling!” Read the Press Release