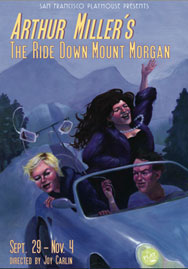 With The Ride Down Mount Morgan, Arthur Miller, the master of social commentary, struck again with his last full-length play before his death in 2005. Lyman Felt (Victor Talmadge) has it all. Wealth, success, power, and the kind of good, solid wife he needs. He also has another wife, the kind of earthy, sexy woman he wants. Lyman juggles his artful lie until a car accident on the slippery slope of Mount Morgan lands him in a hospital bed—with the two wives in the waiting room. But is this truly an accident?

Comical, romantic and suspenseful, The Ride Down Mount Morgan stirs questions about love and marriage as we observe the journey of a man whose insatiable passion threatens to destroy his life.

The SF Playhouse has assembled a cast of Broadway, Hollywood and San Francisco all-stars directed by Bay Area veteran Joy Carlin (an original ACT company member). Victor Talmadge* (Brooklyn Boy, The King and I and multiple film roles) returns to his San Francisco home to play Lyman Felt. He shares the stage with Karen Grassle*, appearing in San Francisco for the first time since her 1960s Actors Workshop days (prior to her starring as “Ma” in Little House on the Prairie) and Nancy Carlin*, Joy’s daughter and longtime associate artist of the California Shakespeare Theater, and a former company member of the American Conservatory Theater. Rounding out the cast are Keith Burkland (Our Lady of 121st Street and ‘Art’) and Kristin Stokes (Brooklyn Boy).
*appears courtesy of Actors Equity Association