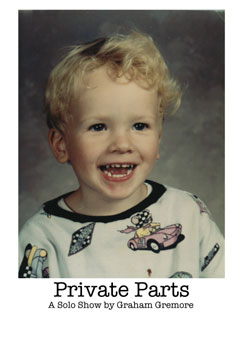 Bay Area writer/performer Graham Gremore presents his solo show Private Parts, hilarious true stories about family dysfunction, disappointment, and his dramatic escape from the Midwest. Join Graham for an evening of stories and songs about his emotionally unstable mother, absent-minded academic father, some woman who died, his third grade teacher who was an idiot, his crotchety, chain-smoking grandmother, and more. If you’re lucky, there might even be nudity. But don’t count on it.Read the Press Release