The Glory of Living 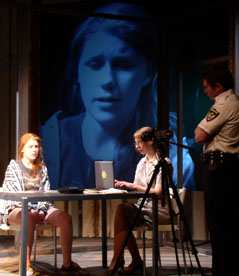 The Glory of Living

Rebecca Gilman has become one of the most prolific and celebrated playwrights in America. Her award-winning plays (“Spinning Into Butter,” “Boy Gets Girl” and “Blue Serge”) are controversial treatments of contemporary social issues and this, Gilman’s first play is no exception.The Glory of Living focuses on 15-year-old Lisa,who tries to escape a miserable life with her prostitute mother by running away with, and eventually marrying,an ex-con named Clint.

In Lisa, Gilman has created a riveting portrait of a young woman whose most striking quality is not her capacity for evil but the depth of her emptiness. Set in the American South, The Glory of Living is based on a true story. “The springboard for the play,” Gilman says, “came from a real Alabama murder during my senior year of college. The criminal was a young girl who had not been taught to value her own life, so she could not be expected to value anyone else’s.”