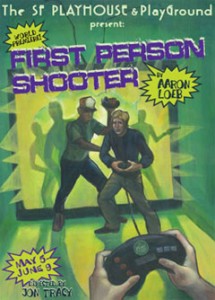 by Aaron Loeb
Extended through June 16th
Wed – Sat at 8pm, Sat at 3pm
The POWER of RESPONSIBILITY
Previews: May 2 – 4

First Person Shooter takes us inside ‘JetPack Games’, a start-up video game company, where the hottest, most violent game on the market has brought instant success to its twenty-something tech geniuses. Their celebration fizzles when their game is blamed for a schoolyard shooting. As the young CEO of Jet Pack deals with an impending lawsuit and the father of one of the victims, he must confront whether he has any responsibilities in the world beyond his computer screen.

The play draws on the national debate over the link between violent videogames and school shootings, which first came to the fore after Columbine. Aaron, who now develops videogames, worked as a journalist covering the world of videogames at the time of Littleton, Colorado shootings and “wanted to write a play about the people caught in the echo chamber of the debate. What must it be like for the people actually accused of making a game that turns kids into killers? What about the parents of the victims? Their children are dead and the news is jam packed with talk of something so trivial as videogames!”Read the Press Release