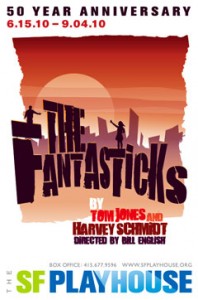 The original production of The Fantasticks opened on May 3, 1960 at the Sullivan Street Playhouse – a small theatre in New York’s Greenwich Village. The musical tradition created by Tom Jones and Harvey Schmidt continues to this day. The Fantasticks is now running strong at the Snapple Theatre and is set to begin its 50th year.

Artistic Director Bill English commented, “On this 50th anniversary of my favorite musical, I could not resist the opportunity to take a look at The Fantasticks from a new angle. What if the world of The Fantasticks was not so whimsical or perfect? How would the songs and story translate? What if we set the “Try to Remember” song in a world devastated by Global warming so that a time when “grass was green and grain was yellow,” was a dim memory, when the ozone layer had been burnt off and “Soon it’s Gonna Rain” was a desperate wish, not a certainty? By re-imagining this classic in the wasteland of a man-made future, we hope to bring new resonance to its theme of hope and of facing the truth, before one can grow.Read the Press Release

Cast & crew of The Fantasticks