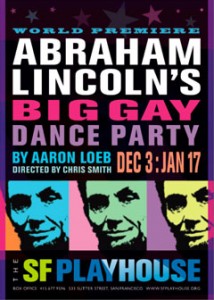 What if President Lincoln was gay? Would you have to rethink everything?

As we re-imagine our national identity in the 21st century, Aaron Loeb’s World Premiere deconstructs our greatest icon in this hilarious farce. Told in three acts–the audience decides the order—with a nod to Inherit the Wind, a “Trial of the Century” determines the fate of a rural third grade teacher who outs Abe as gay at the annual Christmas Pageant.

Abe and the rest of the cast dance in styles from Ballroom to Salsa, and yet, the title belies the seriousness of the play’s ambition to address our deep national divide and bring red and blue states together to redefine what it means to be an American.