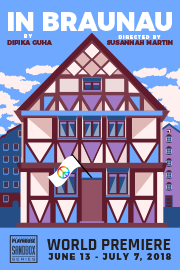 Presented at The Rueff at A.C.T.’s Strand Theater

Sarah and Justin are idealistic progressives, determined to make the world a better place after being stunned by the last American election. They decide to take their indignation to Braunau, Austria—the birthplace of Adolf Hitler—where they embark on a plan to lease the notorious dictator’s childhood home and convert it into a bed-and-dinner. In Braunau is a nuanced, dark comedy about good intentions and the roads they pave.

Dipika Guha was born in Calcutta and raised in India, Russia and the United Kingdom. She is a Hodder Fellow at the Lewis Center for the Arts at Princeton University for the year 2017-2018 and was the inaugural recipient of the Shakespeare’s Sister Playwriting Award with the Lark Play Development Center, A Room of Her Own and Hedgebrook. Her plays include Yoga Play (South Coast Repertory Theatre),  The Rules (SF Playhouse), The Art of Gaman (Berkeley Rep Ground Floor ’16, KILROYS LIST ’16, Relentless Award Semi-Finalist), I Enter the Valley (Theatreworks New Play Festival, Southern Rep New Play Festival), Mechanics of Love (Crowded Fire Theatre, Two by For, NYC) and Blown Youth (published by Playscripts). Most recently her work has been developed at Playwrights Horizons, Rattlestick Playwrights Theatre, Roundabout Underground, McCarter Theatre’s Sallie B. Goodman Residency, New Georges, Shotgun Players, the Sam French Off Off Broadway Short Play Festival, Southern Rep, 24 Hour Plays on Broadway and the Magic Theatre amongst others. Dipika has been the recipient of several residencies and fellowships including the Djerassi Residency Program, the Hermitage Retreat, Ucross, SPACE at Ryder Farm and a Dramatists Guild Fellowship. She is an alumnus of Ars Nova Playgroup, the Soho Rep Writer/Director Lab, the Women’s Project Lab and the Ma-Yi Writers Lab. She is currently a visiting artist at the Schell Center for International Human Rights at Yale Law School and a resident playwright at the Playwrights Foundation. MFA: Yale School of Drama under Paula Vogel. 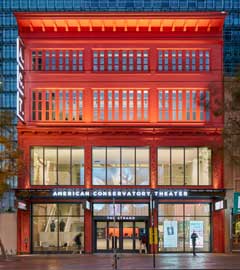 Located directly across from Civic Center’s lively UN Plaza, The Strand is A.C.T.’s dynamic 283-seat theater with a cafe in the Central Market neighborhood.