The Violet Hour is a Jazz-Age fantasy about fate, ambition, and loyalty. It concerns the mysteries of time and destiny in the thought-provoking ways that have made Greenberg (Take Me Out) a celebrated master.
Fledgling publisher John Pace Seavering has staked his future on his next book. But which writer will he choose? As he struggles between the work of his Josephine Baker-like lover and that of his best friend, a gifted writer à la F. Scott Fitzgerald, a mysterious printing machine arrives and hilariously complicates his dilemma and pokes fun at his futile efforts to control the future. A magical, haunting and inspirational story about the choices we make, the accidents that happen, and that moment, the violet hour, in which it is impossible to tell the difference.

“The play is an attempt to find a value above all price for the smallest events in our daily life.” -Thornton Wilder
Our Town . . . a great American play, in the words of Donald Margulies, …”perhaps, the great American Play. Its unfashionable insistence on embracing wonders as well as woe is both gallant and exhilarating. Our Town leaves us with a sense of blessing, and the unspoken but palpable command to achieve gratitude in what remains of our days on earth. It touches the soul like a miracle.”
Featuring: Wanda McCaddon* as the Stage Manager, with Greg Ayers, Jeff Bryant, Keith Burkland, China Raven-Crawford, Susi Damilano, Ashkon Davaran, Lauren English, Catz Forsman , Jean Forsman, Celik Kayalar, Mark Knudsen, Esther Mulligan, Hal Savage, Pat Sieler and Dan Wilson. (*Appears courtesy of Actors Equity.)
Our Town debuted in 1938 and won the Pulitzer Prize for Drama. In the words of playwright Donald Margulies, it is “perhaps the great American Play.” Reviewing the original New York production, the New York Times said Our Town “transmuted the simple events of human life into a universal reverie.” Called America’s most read and most produced play; it has also been translated into many languages and seen internationally in Poland, Germany, Russia, Japan, China, Korea and elsewhere. 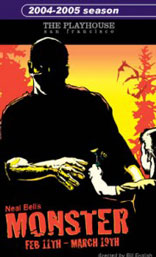 “Don’t waste a good dream for something you can have, dream of the impossible.” -Victor Frankenstein
MONSTER is a brilliant new take on Mary Shelley’s Frankenstein, it diverges from the well-worn path created by Boris Karloff and Mel Brooks by creating a Dr. Frankenstein in his twenties, a brilliant bio-tech genius, whose morality lags far behind his scientific genius and a Monster who has a voice, who can truly speak of the horror of his creation and the despair of his abandonment. 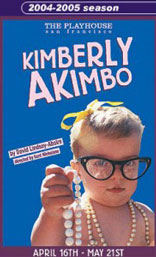 What if a disease aged you 4.5 times faster than nature intended? What if you experienced menopause before your first kiss? Or contemplated death just as your hormones were urging you to contemplate life? Kimberly Akimbo combines the heartbreak of the brevity of life with the teen angst of waiting for life to begin, and in the hilarious world of a Lindsay-Abaire play, Kimberly finds that despite these challenges, she is the normal one. 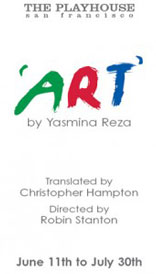 Yasmina Reza’s Multi-Award Winning ‘ART’ is a wickedly witty portrait of modern art and old-fashioned friendship as three longtime friends come to blows over the value of a very expensive piece of art. A play about “the infinitely large and the infinitely small,” according to playwright Yasmina Reza, ART is the story of three friends and the painting that threatens to tear them apart. Serge, Marc, and Yvan are about to have dinner, but not before Serge reveals his latest coup: a very expensive painting by one of the hottest artists around, painted entirely in shades of white. Marc, who fancies himself Serge’s cultural mentor, is mystified by the purchase, while Yvan, who survives by quietly going along with the consensus, is asked to choose sides. While the friends’ evening proves near disastrous, Reza deftly reveals universal truths about men, art, and the ties that bind them.
Adding an intriguing twist, the SF Playhouse production features Artistic Director Bill English as Serge and decades-long friends Louis Parnell as Marc and Keith Burkland as Yvon