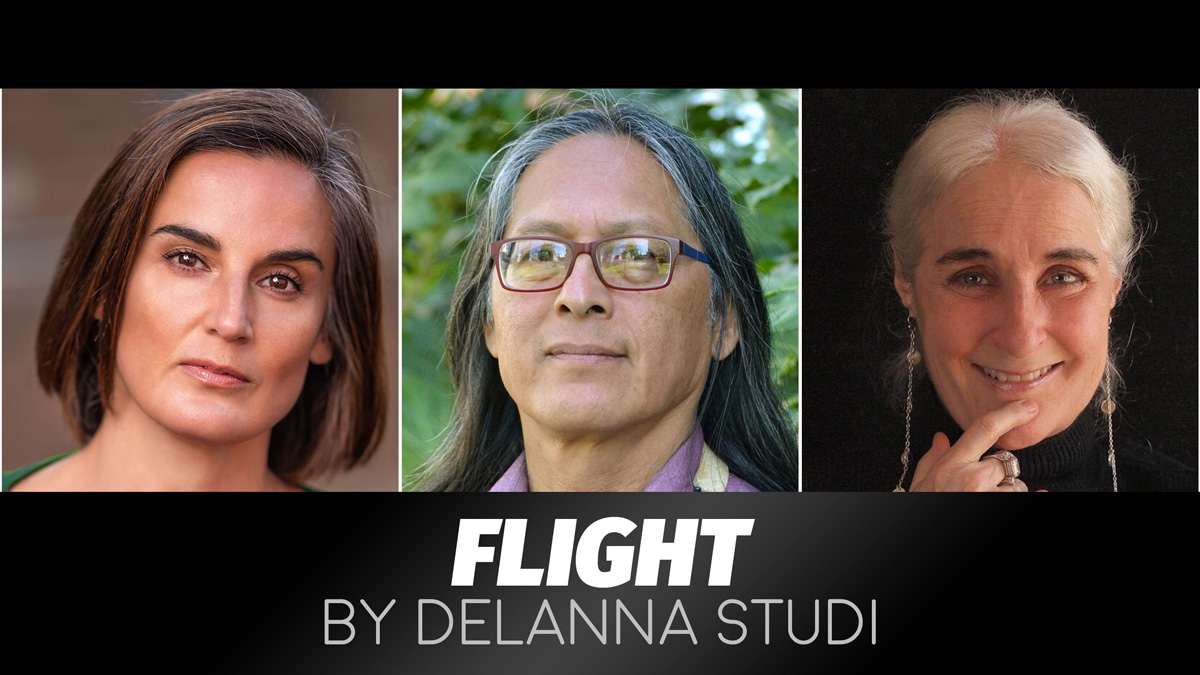 In Flight by DeLanna Studi, Quoya and her father, Otto, talk about a suicide she witnessed.  Otto offers advice for Quoya on how to handle this traumatic event with what it means to be the 7th generation of Cherokee after the Trail of Tears.

DeLanna Studi
DeLanna Studi is a proud citizen of the Cherokee Nation. She is an actor/playwright whose TV credits include “Dreamkeeper”, “Edge of America”, “Shameless”, “General Hospital”, “Z Nation”, and the recent season of “Goliath”. Her theater credits include the First National Broadway Tour of “August: Osage County”, Off-Broadway’s “Gloria: A Life”. She retraced her family’s footsteps along the Trail of Tears with her father and created her play “And So We Walked” which has been touring for the last three years, and it was the first American play to be chosen for the Journées Théâtrales de Carthage in Tunisia. She is the Chair of SAG-AFTRA’s National Native Americans Committee and the Artistic Director of Native Voices at the Autry, the country’s only Equity theatre company devoted exclusively to developing and producing new works for the stage by Native American, Alaska Native, Native Hawaiian, and First Nations playwrights.

Marie-Claire Erdynast
Marie-Claire Erdynast (Cree Métis and Ojibwe) is thrilled to be directing Flight by DeLanna Studi. She also recently directed a reading of The Sunrise from the Moon by Hannah Manikowski and assistant directed Tiny Beautiful Things at San Francisco Playhouse. Thank you to all her friends and family that have tuned in tonight!

Eileen DeSandre as Sarah
Eileen DeSandre is an actor of long and varied experience, most recently the one-person ‘Becoming Dr. Ruth” at Orlando Shakes, which closed February 9, 2020. However, this is her first experience with remote play-reading! Thanks to all the folks involved, and for the exciting [and scary] opportunity!

Tanis Parenteau as Quoya
Tanis Parenteau is an actor/producer and a member of the Métis Nation of Alberta (Cree). TV: Billions, FBI: Most Wanted, Designated Survivor, House of Cards. NYC: Manahatta (The Public Theater), Smoke (Signature Theater), Glenburn 12 WP (59E59 Theaters), Material Witness (La Mama). Regional: Manahatta (Oregon Shakespeare Festival). Tanis also does frequent voice over work and narrates audiobooks for Penguin Random House, Audible, Hachette and Simon & Schuster. Tanis is on the producing team at Red House Studios developing a narrative drama series titled Red House and recently launched a podcast called “Not Invisible: Native Womxn on the Frontlines”, in which Tanis is also the host. She is on the SAG-AFTRA National Native Americans Committee and works with the American Indian Community House as the Events and Media Manager and runs Fit Native TV program and the Native American Industry Roster. Master of Fine Arts in Acting from New School for Drama. www.tanisparenteau.com