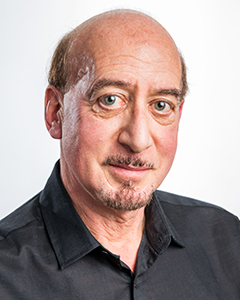 Dan Schwager (he, him, his) has performed in a variety of Bay Area theatre venues and is thrilled to be part of this fantastic cast at San Francisco Playhouse. Prior to his most recent performances this past Spring in Roe for Actors Ensemble of Berkeley, and Saturday Night at Grossinger’s for Sonoma Arts Live, Dan performed in Antigone at the COM Theater, and at Ross Valley Players in Moll Flanders. Dan has also performed with Pacifica Spindrift Players in The Crucible as Reverend Parris, with Foothill Theater in The Diary of Anne Frank as Mr. Van Daan, and in four additional productions at Actors Ensemble of Berkeley (Middletown by Will Eno, A Dybbuk by Tony Kushner, and two Ibsen plays, The Lady From the Sea and Rosmersholm). He has previously performed in musical roles in My Fair Lady (Doolittle) and Guys and Dolls (Benny Southstreet). Dan grew up in New York City and, after obtaining a law degree, has had a long career in hospital administration at UCSF and San Francisco General Hospital.