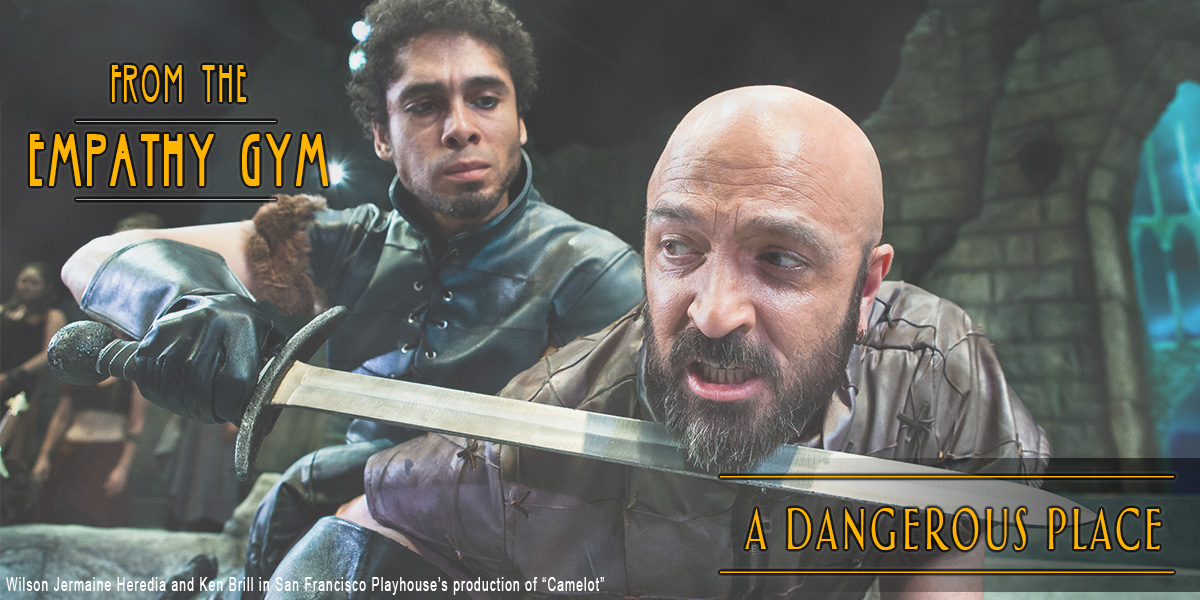 From the Empathy Gym | A Dangerous Place

I attended my very first live theater performance at the age of 7. I saw Tad Lincoln in the White House as part of an amazing theatre program sponsored by the Evanston, Illinois school district that produced plays specifically aimed at school-age audiences.

At the time, I was mostly interested in baseball, and spent countless hours thumping a ball into my first baseman’s glove to create the perfect pocket. But I was enjoying the first half of the play, which broke for intermission just as Tad received a miniature cannon for his birthday. Several minutes into the intermission, and mid-way through a peanut-butter drop cookie my mom had packed as a snack, a loud boom echoed from backstage followed by the billowing out of the curtain. A stunned silence swept over the crowd. Moments later, our drama teacher appeared from behind the curtain, her face ashen-white. She announced that there had been an accident and the play could not continue. We would all have to go home.

The next day, I learned what had happened. While loading the cannon with gunpowder and wadding, a stagehand had accidentally detonated the device which blew off one of his fingers. Fortunately, the doctors had managed to sew the severed finger back onto the hand. I confirmed this fact when I later saw the injured stagehand in the janitors’ closet with his finger wrapped up but laughing and joking with his colleagues, none the worse for the mishap. 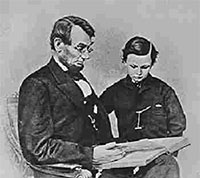 The real-life Tad Lincoln (Abe’s youngest son) with his father.

My childhood self concluded from this incident that the theatre was a dangerous place, where, unlike the movies, things could go drastically wrong at any moment. Something about this sense of danger appealed to me back then, and it still does. Countless performances later, I still cherish that spirit of danger and unpredictability. Anything can—and will—happen. And ironically, although we continually strive for excellence, theatre can often be defined by what goes wrong. An actor falls ill mid-show and, after a brief pause, is replaced by an understudy holding a script.

One of the finest actors I know once went up (forgot his lines) in a final preview. He verbally stumbled and could not find his way through the scene. Everything stopped. From the back of the house, after a few choice expletives uttered under my breath, I dashed backstage into his dressing room, grabbed his script and literally tossed it to him from the wings. Re-assured by having his precious words close at hand, he soon found the thread and never looked at the script again. And despite this confidence-killing preview, he performed flawlessly on opening night.

As much as we in the theatre strive to provide our audiences with flawless performances, the theatre gods prefer to bestow on us a healthy dose of the unpredictable. Our own Stage Manager, Tatjana Genser, observed this phenomenon in her show report from a recent performance of Stage Kiss:

“Let it be known that as a belated Christmas present, we finally got our first performance where nothing broke, nothing went wrong, nothing malfunctioned and all went well. The magic number apparently was 37. The stage management team will now rest easy, knowing we did it once!”

Sometimes the catastrophic event that disrupts a performance can create an opportunity for something wonderful to occur. At a performance of Suicide in B Flat at the Magic Theatre long ago, just a few minutes before the play was to begin, the power to the entire building went out. Oh boy! A few minutes later, a stage manager wielding a flashlight announced that the show would go on. How? We, the audience, would all go out to our cars and bring back any source of light we could find. The audience obediently collected several Coleman camping lanterns, a half dozen flashlights, and many candles. The Fire Marshall, had she been there, would have surely been aghast.

A few minutes later, duties had been assigned to audience members for the various lighting effects including a bit a shadow-play called for in the script that was now provided by the flickering flame of a hand-held candle. The effect was stupendous. A theatre performance that no actor or patron who was present will ever forget. Only in live theatre, with its potential for moment to moment disaster, could something so glorious have occurred.

On opening night, a producer can be more painfully aware of the moment to moment possibility for catastrophe, but I think under our mellow façade, every theatregoer instinctively knows that the continuity of a performance can be disrupted at any moment. Actors know this best of all. Line flubs, blocking kerfuffles, light cue errors, a failed microphone; these are the daily realities for actors performing on stage. For the very best actors, facing this reality can become a Zen-like discipline. They know their lines, their blocking, their character’s backstory, but wary of the potential for error they show up for each moment with no expectation of what will happen. Someone else speaks and they respond. Differently each time, because the stimulus is different.

Director (Mark Anderson Phillips) goes over lines with She (Carrie Paff) and He (Gabriel Marin) in ‘Stage Kiss’, now playing.

There is a special kind of magic in this moment-to-moment presence where one is always ready for something to deviate, something to go wrong. We sense this particularly in great actors, who exude a kind of danger. It’s as if they have no idea what they are going to do next and are utterly unpredictable. We hang on their every word. A big pause, and we fear they have forgotten their line. But no, their concentration is absolute—they are just taking their time to absorb and process their cue and we are riveted.

And this is the essence of great theatre. As I learned with Tad Lincoln long ago. Theatre is a dangerous place, just like real life, where nothing can be taken for granted. Where we hope for the best, but we come prepared to deal with the worst, where we try not to live in our expectations, but take in one moment at a time.

As always, please let me know what you think of this post and if you have any “what can go wrong” theatre stories.

Bill, you are such a good writer! I really enjoy reading your posts! Tad Lincoln was a wild little boy. Sounds like the cannon going off could have been part of the play. (I know that it wasn’t.)