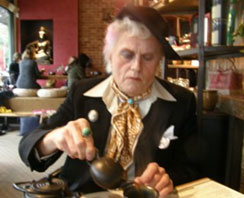 Written and Performed by Richard Louis James
Sundays in July and August at 2:30pm

Back by popular demand, Richard Louis James, returns each Sunday in July and August to the SF Playhouse as the notorious Quentin Crisp in his one-man show Tea ‘N Crisp.

Tea ‘N Crisp, isbased on the writings and public appearances which made this Stately Homo of England a beloved and cherished spirit in the hearts of the LGBT and straight community.

“Keeping the spirit of Crisp, Richard Louis James has crafted a wonderful play and tribute. It’s really hard to believe that it is not really Quentin Crisp talking to you. If still alive, Crisp might have said of James – “Bad acting is for a little while. Good acting is forever!” He would have been pleased with Richard Louis James’ performance. “A Hell of a good time. – I loved it!”

“I knew Quentin well and he would have thought this SUBLIME! BRAVO!!! (jimmeyrae, youtube blog)

“A fine piece of work and a brilliant performance.” (J. Kysela, www.quentincrisp.info. blog)

This being the Centenary year of Quentin Crisp’s birth, born December 25, 1908, (a day Quentin professed having to share with another famous person) the San Francisco Playhouse is proud to present the S.F. debut of Tea ‘N Crisp. A pioneer of individuality, predating Stonewall by decades, Quentin Crisp minced about the streets of London adorned with henna hair, lipstick and jungle red toenails blazing through open toed sandals and held court in the cafes of the Chelsea district dispensing his wit and wisdom. Without compromise he stayed true to his own individual style even though he endured bodily harm, ridicule and narrowly escaped prison on false charges of solicitation. Unable to gain suitable employment in the mainstream workplace he stumbled upon a civil servant job, an artist’s model, where he would remain for several decades. Chronicling his experiences up to post World War II England he wrote his autobiography, The Naked Civil Servant, although he preferred to call his life story I Reign In Hell because as he put it: “Mr. Milton recounts how Satan (who Mr. Crisp attests was his only role model) had said ‘better to reign in Hell than to serve in Heaven.’ which he says is what he had done. “I reigned in the exciting Hell of Soho instead of serving in the boring Heaven of Kensington.” In his sixties The Naked Civil Servant was made into a movie for television starring John Hurt and a gay superstar was born. Late in life when most people decide to go into a nursing home he moved to his beloved Manhattan and the rest of Quentin’s life, living to ninety-one, was filled with much sought after public appearances, writings and lectures. Mr. James has carefully woven this incredible icon’s life experience into a performance of profound depth laced with Quentin Crisp’s unmistakable humor. Enjoy Sunday Tea with Quentin Crisp.