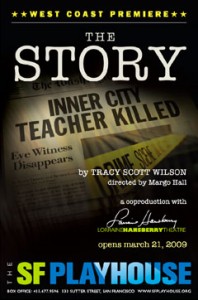 “As deadlines loom and more layers of truth and character are revealed, Hall builds the tension to riveting effect.”—San Francisco Chronicle

San Francisco Chronicle on The Story

Inspired by real-life events, an ambitious newspaper reporter goes against her editor to investigate a murder and finds the best story…but at what cost? Wilson explores the elusive nature of truth as the boundaries between reality and fiction, morality and ambition become dangerously blurred.

Originated at the Public Theatre featuring Phylicia Rashad and directed by Loretta Greco, the NY Times called it “conscientious and absorbing”. The Story is inspired by the Janet Cooke scandal at the Washington Post in 1981 where Cooke won The Pulitzer Prize for writing about an inner city child, Jimmy, only to later admit the story was fraudulent.Read the Press Release

Cast of The Story

Cast of The Story

Cast and Crew of The Story

Cast and Crew of The Story