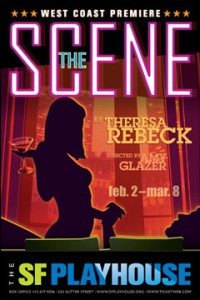 Theresa Rebeck’s The Scene, a thoroughly modern, sharply written black comedy, was the scene-stealer at the 2006 Humana Theater Festival. It is full of people in ‘the scene,’ on ‘the scene’ and desperate for ‘the scene.’ If you have ever done something despite your better judgment, maybe chose to follow the crowd instead of following your gut to avoid hard, emotionally painful work, then you will understand Charlie, the provocative and complex protagonist in this fierce, edgy, raw and scathing new comedy.

Inspired by Rebeck’s occasional forays in the Manhattan party circuit, her run-ins with celebrities six-stories high, and poignant, self-revelatory films like Of Human Bondage and Blue Angel, the play starts out sickly funny and turns darker and darker the further Charlie goes down the road. Like a good Chekhovian drama, the play showcases the humor and tragedy of everyday life. Its biting satire echoes Molière’s ruthless comedic attention to detail, and like a satisfying Greek tragedy, the piece mines humanities brutality examining how self-loathing can move from the world and into the self. “Human beings range from saints to monsters, and for me, you’re constantly being challenged as to where you’re going to fall on that continuum. What choices are you going to make? Which direction are you going to go in?” Rebeck asks.

We are living in difficult times, according to Rebeck, and it’s easy to be confused about what it means to be a human being in this world. For those, like Charlie, struggling to make sense of the world the play is a reminder that the journey can be funny as well as terrifying.

Daphne ZunigaThe SF Playhouse is thrilled to welcome Daphne Zuniga* of Melrose Place and Spaceballs fame to their stage. She will be joined by Aaron Davidman*, Heather Gordon and Howard Swain*.
*Appear courtesy of Actors Equity.Read the Press Release