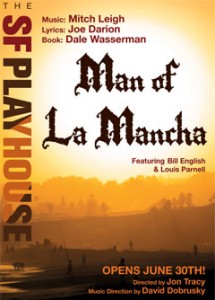 The epic story of knight-errant Don Quixote, his servant Sancho, and the woman of his dreams, the lovely Aldonza/Dulcinea. The tale-set during the Spanish Inquisition-tells the romantic and noble journey of a knight who sets out to right all wrongs and win the heart of a good woman as he duels windmills along the way. Based on The Adventures of Don Quixote by Miguel de Cervantes’, Man of La Mancha is the classic comic tragedy of man’s struggle against all odds to dream impossible dreams.Read the Press Release