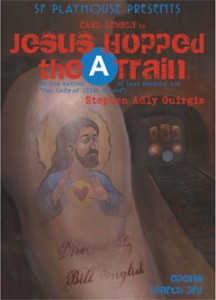 From the writer of last seasons’ hit Our Lady of 121st Street, comes the searing comedy, Jesus Hopped the ‘A’ Train, a truth-telling, cage-rattling play about faith, justice and diminishing options in an American prison.

Angel Cruz, a poor Puerto Rican, isn’t sure why he’s in jail after shooting Reverend Kim, the Cult-leader who brainwashed his best friend.

“All I did was shoot him in the ass”, he explains to his long-suffering lawyer Mary Hanrahan. As Angel dukes it out verbally in the prison exercise yard with a born-again killer, he slowly learns to accept responsibility for what he has done.