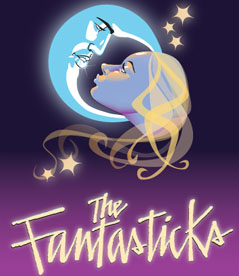 The SF Playhouse ends its first season with The Fantasticks. After a 42-year run, The Fantasticks closed in New York in January of 2002 with the distinction of being the world’s longest continuously running musical, not to mention one of the most beloved. This summer, the magic lives on at the SF Playhouse with artistic director Bill English leading the cast as El Gallo.

Rich in imagery and lyrical appeal, The Fantasticks is a story about young love, parents, the world, and human nature, but most of all about young love. Beautiful melodies, among them the hit songs “Try To Remember” and “Soon It’s Gonna Rain” sparkle throughout the comedy and evoke the agony and rapture of being young, full of dreams, and giddy with love.

Tom Jones (Book and Lyrics) and Harvey Schmidt (Music) created The Fantasticks in the spirit of a whimsical Romeo & Juliet. The Boy and The Girl grow up next door to each other separated by a wall their feuding fathers built to keep them apart. Knowing their children would do anything they said “no” to; the forbidden wall makes The Boy and The Girl fall wildly in love with each other. Once they discover their fathers actually planned the whole thing to get them together, their romance suffers a series of whimsical and melodramatic developments. In the end, aided by a mysterious swashbuckling dream-weaver and his comical associates, the lovers mature, and love conquers all.