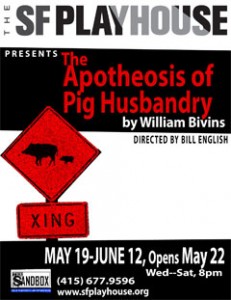 In The Apotheosis of Pig Husbandry we find a woman in a slip handcuffed to a bed. A bar that only serves one drink. Windows duct-taped to keep out the smell. Welcome to the Lazy Eight Motel, where sex, revenge, social theory and pig farming mix in an explosive cocktail.

Philosopher and social theorist Asuncion “Assy” Boyle drifts into town, buys the derelict motel downwind of the biggest pig farm in the state, and seduces the pig farmer’s wife Lola. His plan? To put Charles, the farmer, out of business and clean up the pig shit that’s destroying the community and polluting the groundwater. But since Assy blames Charles for his mother’s death is this really social justice… or naked revenge? By the startling end of the play, Assy learns what happens when you take justice into your own hands.