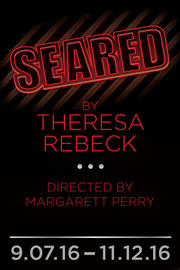 “ All four actors are superb, and production values are exemplary.” – for all Events

“It’s fascinating in an edge-of-the-seat sort of way, and the element of suspense is maintained to the extent that you almost want to jump up and tell the characters what to do and say ” – ArtsPreview

“Theresa Rebeck’s dialogue is sparking and clever, and the four-member cast is terrific, with each giving a perfect performance, thanks to director Margaret Perry.” – Talkin’ Broadway

“The cast members of Seared absolutely burst with both subtly nuanced and rambunctiously bold flavors in their individual and collective performances.” – Theatre Eddys

“ With strong performances from the entire cast, and energetic direction from Perry, there’s much to like here. ” – Two on the Aisle