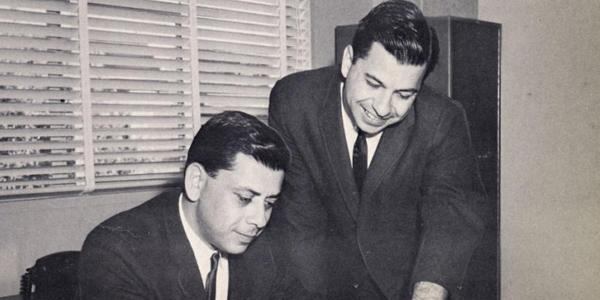 The work of the brothers Richard M Sherman and Robert B Sherman is enjoying a fresh chapter of success in musical theatre with sensational stage revivals of Chitty Chitty Bang Bang and Mary Poppins now playing across the UK. Chitty originally opened in the West End in 2002 going on to become the longest-running musical ever at the London Palladium, before playing Broadway and beyond, garnering huge international success. The stage production of Mary Poppins, co-produced by Disney and Cameron Mackintosh, opened to critical acclaim in London in 2004, winning two Olivier Awards, with the Broadway production running for six years. The Jungle Book, another Shermans/Disney favorite, has also recently made the screen-to-stage transition, premiering at the Goodman Theatre in Chicago.

The Sherman Brothers gained recognition in popular music with several top-ten hits – among them You’re Sixteen, Let’s Get Together and Tall Paul. 1960 marked the start of a phenomenal 10 year association with Walt Disney, during which time they composed over 150 songs for his films, TV shows, Disneyland and other theme parks. Their Disney credits include the films The Jungle Book, The Parent Trap, Bedknobs and Broomsticks, The Sword and the Stone, The Aristocats, The Happiest Millionaire, the Winnie the Pooh series, and of course Mary Poppins. They also wrote the most translated and performed song on earth, “It’s a Small World (After All)”.

They went on to compose song scores for Snoppy Come Home, Charlotte’s Web, the Broadway hit musical Over Here! and the ‘fantasmagorical’ Chitty Chitty Bang Bang – with its Oscar-nominated title song.

The Sherman Brothers created screenplays and song scores for Tom Sawyer (their music won First Prize at the Moscow Film Festival),Huckleberry Finn, the 1976 Royal Film Performance The Slipper and the Rose (with co-author Bryan Forbes), and The Magic of Lassie which also earned them their 9th Academy Award nomination for Best Song. More recent credits include the book Walt’s Time – a wonderful autobiographical and pictorial journey through their song-writing years; the Disney hit animated feature The Tigger Movie, the stage musical Busker Alley starring Tommy Tune in the United States and Beverly Hills Cop 3.

In addition to their Oscars, other honors awarded to the Sherman Brothers include 3 Grammys, 24 Gold and Platinum Albums, as well as a star on The Hollywood Walk of Fame.