From the Empathy Gym | Who Am I This Time?

In the great Kurt Vonnegut short story, “Who Am I This Time?”, Harry Nash, the awkward hardware store clerk, but also the best actor in town, struggles to relate when off-stage. His mutual crush with Helene Shaw goes nowhere until she discovers that Harry can be romantic, but only if he is playing a character. When Vonnegut created this tale, he tapped into much more than a small town romance. He was mining a universal element of human nature. Not only actors go from role to role, but all of us, as Shakespeare put it, “play many parts.”

For much of my life, I often felt like a chameleon, adapting to whatever situation I was in. As a teen, I bumped elbows with the jocks, smoked pot with the rebels, debated with the intellectuals and emoted with the artists. No wonder I pursued a career in theatre! But I think I am not alone. Many, if not most, of us feel like social adapters and we become so good at it we wonder if, under all of our multiple “acts,” one for our families, one for bosses, one for employees, one for friends, if there is any essential self underneath. We wonder if we are merely vessels, inhabited by whatever role is required of us.

Herman Hesse, in his great novel “Steppenwolf,” wrote that “the goal of the theater is the dissolution of the personality.” Certainly it is no coincidence that both our “Magic Theatre” and “Steppenwolf Theatre” in Chicago take their names from this novel, in which another “Harry” is relieved to discover that rather than being condemned to suffer two conflicting personalities of wolf and human, he has access to hundreds or thousands of personalities. This mirrors the Taoist idea that individuals are constantly shifting stages of being in order to pursue immortality. 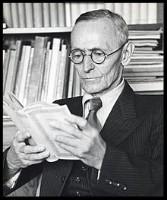 We think passions are our identity, but what is the essential self beneath our “act”?

What did Hesse mean by “dissolution of the personality?” That by breaking the mirror of our likeness into a thousand pieces, we can see that no essential self exists. That the ego is an illusion. We see that all the passions and grasping and longings and holding on are ephemeral. Do they evaporate when we take off our costume? Perhaps one of the lessons of theatre is that personality itself is fleeting. An illusion. We learn this as we watch the actor “strut and fret his hour upon the stage,” clearly aware that his character is not real, that the engine of the actor is channeling fictitious passions out of thin air.

In daily life, is it our raging passions that make us feel real? Are we all the “drama queens” of our own lives? I know that I sometimes get sucked into conflict with friends and colleagues because it makes me feel engaged, it gets my blood going. It’s addictive. We think passions are our identity, but what is the essential self beneath our “act?” What are we when we take off our mask? Or to paraphrase Kurt Vonnegut: “Who am I between times?” I think many of us sometimes feel empty when we are not “on.” Theatre reminds us of the transitory nature of personality itself. By both identifying with and being distanced from characters, we are prepared to accept the ephemeral nature of our own passions. Buddhist philosophy teaches that emotions are like clouds floating by and above our true selves. Perhaps it is a function of the Empathy Gym to work out with big raging emotion and then rinse them off in the shower, leaving us cleansed and pure and empty.

Actors instinctively know that personality is an illusion. They know that characters are composed, like giant Lego sculptures, of tiny bits of detail, wired together by the expert skill of the actor to create the illusion of a real human. The more difficult truth to grasp is that our “real” personalities are also composed of thousands of learned bits of detail, copied from parents, from school, from mass media, or from friends, and we often use this emotional vocabulary to  mirror back what is useful, what is needed, what is expected.  One day we are “full of sound and fury,” and the next we wonder, “what was I thinking?”. Theatre helps us learn to identify when we are playing a fiction, milking a scene, reveling in a role, or mirroring back programmed behavior.  It can also be comforting to know that the pain we feel when the curtain comes down, like the terror we experience waking from a nightmare or the anxiety of working through life’s dilemmas, are fleeting like the clouds floating by or a role we once played some years ago.

Old truths well expressed, reminders which some may find uncomfortable but I find reassuring somehow. Thank you for sharing

Thanks Bill, for your amazing messages. A rewarding dividend of SFP membership. Mike Smith

A very powerful statement. Thank you!

Thoughtful, Bill, and timely.
Yesterday, a friend recommended that I read the Dalai Lama’s, The Art of Happiness, and begin meditating daily. The “dissolution of personality” may lay therein, complemented with the offerings of SFPH. –Jon

Hi bill, how comforting to read your musings about the efervescence of personality and the caleidoscope of flags we wrap ourselves in. No wonder it is so hurtful when others boil us down to a label — the pilot, the fat one, the old gomer, the mom.

Thanks for sharing!
Barbara

I always look forward to your monthly post….you never disappoint . Thank you.
Always thoughtful and incite full . The nail is making an extra loud noise this month.

I enjoy your posts Bill, they always leave me reflecting on the depth of our experience as human beings and the role of the theatre in supporting our continual growth and exploration.

I dispute that personalities are all illusion. People routinely encounter irreconcilable difficulties due to personality that is hard-wired into their soul, and a poor fit to situation. If such personality were illusion, no professional therapist would ever treat personality disorder. For example, dietary and other lifestyle restrictions are too much for some peoples’ personalities to comply with. I really don’t know many people who shift freely among personalities that suit their stations in life. Instead, they settle for whoever their real selves can get along with.

“Actors instinctively know that personality is an illusion.” I don’t buy that completely. Let’s start from the perspective of the producer or director of a play or movie. When casting for a part, the director does not take anyone thinking that personality is an illusion. He/She will cast depending on what the part calls for–male/female, old/young, heavy/thin and so on past obvious things to thinking, “this actor can play this character better than that character.” This audition, oh yes, there are auditions so that the director can choose who fits the role. He/She does not pick anyone thinking that personality is just an illusion so that anyone can fit the bill. Fixed or known personality will determine who gets the part.

I miss being with other actors. It always seems like the most insightful conversations since everyone works to try to understand the way people think. Love this kind of stuff, good write-up Bill