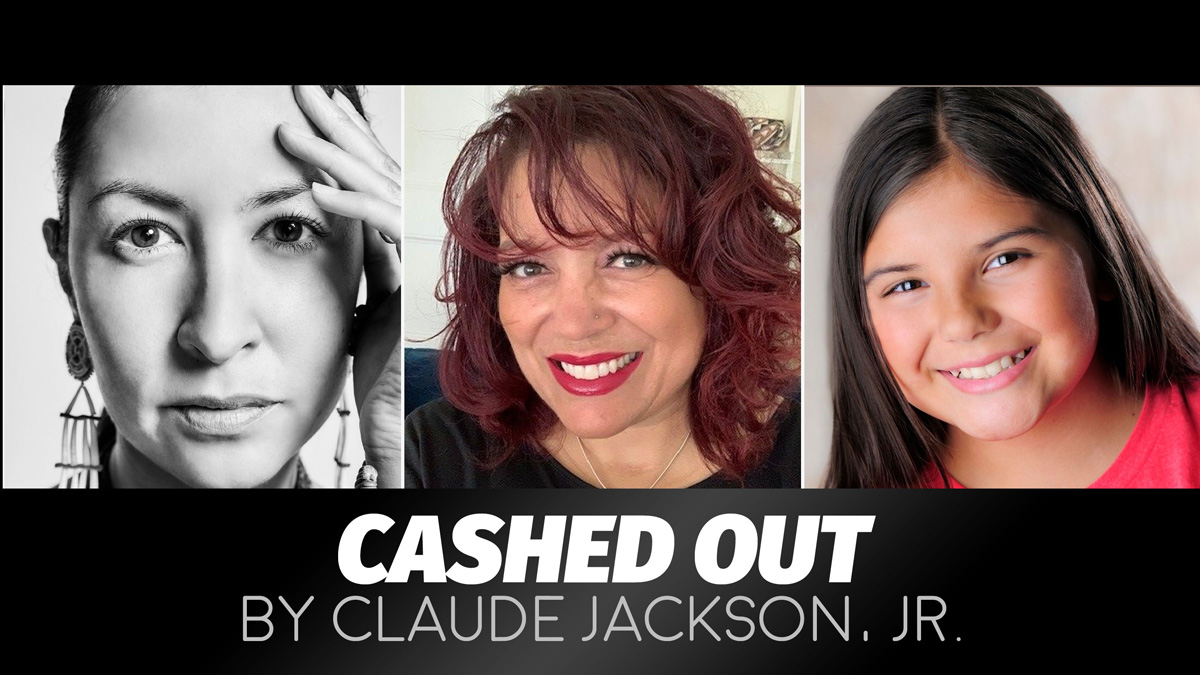 Rocky comes home to celebrate her big win at the casino, but her Auntie Nan is not having any of it. Because she knows Rocky is a gambling addict and in the middle of a freefall. This affects the women and Rock’s daughter, Maya as the ladies drum up the past living on an Indian reservation.

Claude Jackson, Jr.
Claude Jackson, Jr. is an attorney and currently the Director of his tribe’s public defender’s office. Five of his plays were featured in previous Native Voices at the Autry Short Play Festivals, including winning the festival in 2019 for his play Cashed Out. Claude and his brother Roberto wrote, produced and directed a feature film, In Circles and can be seen on Amazon Prime and other streaming outlets. Claude recently acted in the play Native Nation in Arizona, produced by Cornerstone Theatre Company and Arizona State University and Indian School, also produced by Arizona State University. He is married to Lea and they have three kids: Zaryk, Kaleb and Naiya.

Edris Cooper-Anifowoshe
Edris Cooper-Anifowoshe is an accomplished actor, director, writer, working in the Bay Area for almost 40 years. She is the founding artistic director of the award-winning ensemble Black Artists Contemporary Cultural Experience (BACCE), with whom she has directed and produced 10 critically acclaimed productions. A former member of the San Francisco Mime Troupe, Edris has both directed and acted in productions for the collective. She has directed locally and nationally at Trinity Rep, Capitol Rep, Southern Rep, Carpetbag Theatre, Alabama Shakespeare Festival, WaterTower Theatre, Curious Theater, Sf Playhouse, Magic Theatre, TheatreWorks in Palo Alto, and the Lorraine Hansberry. She has received recognition as a director from Dallas’ Rabin Awards and Backstage’s Dean Goodman Award for Excellence. Edris has appeared as an actor in productions at SF Playhouse, Aurora Theatre, Magic Theatre, TheatreWorks, Theatre Rhino, Word for Word, Lorraine Hansberry Theatre, Campo Santo, San Diego Rep, and Arts Theater in Nigeria. She was a core member of Rhodessa Jones’ Medea Project: Theater for Incarcerated Women for 11 years. Her plays, Adventures of A Black Girl In Search of Academic Clarity and Inclusion and There are Women Waiting are published in the anthologies, solo/black/woman and Black Medea, respectively. She holds an MFA in Theater from the University of Iowa. In addition to BACCE, Edris is a member of Campo Santo Theatre company, Word for Word and the National Institute of Directing and Ensemble Creation. Edris joined the faculty of Goddard College Master of Fine Arts in Interdisciplinary Arts (MFAIA) in 2021.

Rainbow Dickerson as Rocky Camu
Rainbow Dickerson was recently named one of four Rising Stars during the 2020 Toronto International Film Festival for her work in the feature BEANS, directed by Tracey Deer. The film  went on to take 2nd runner up in TIFF’s Peoples Choice Award and Best Canadian Feature at the Vancouver International Film Festival. Dickerson has also been selected to join the cast of the 2020 ABC Discovers Showcase. She trained in London and New York City, and has a  stage career which currently spans more than seventy productions, including nine world premieres. Selected stage and screen credits include GONE, CHICAGO FIRE, BANSHEE, work on Broadway, with the Oregon Shakespeare Festival, American Repertory Theatre, Native Voices and many others. Dickerson currently resides in occupied Gabrielino-Tongva territory and is represented by Liberman Zerman Management.

Carolyn Dunn as Auntie Nan
Carolyn M. Dunn, PhD., is an indigenous poet, playwright, musician, director and actor whose identity includes Cherokee, Muskogee Creek, Seminole and Choctaw Freedman descent on her father’s side, and Tunica-Choctaw-Biloxi and French Creole on her mother’s. In addition to Outfoxing Coyote, her books include Through the Eye of the Deer (with Carol Zitzer-Comfort) Aunt Lute Books, 1999), Hozho: Walking in Beauty (with {Paula Gunn Allen, McGraw Hill, 2002), Coyote Speaks (with Ari Berk, H.N. Abrams, 2008), Echolocation: Poems, Stories and Songs from Indian Country: L.A. (Fezziweg Press, 2013), The Stains of Burden and Dumb Luck (Mongrel Empire Press, 2017). Her plays The Frybread Queen, Ghost Dance, and Soledad have been developed and staged at Native Voices at the Autry in Los Angeles. Directing credits include The Red Road and Round Dance, both by Arigon Starr, 49 by Hanay Geoigamah, Sliver of a Full Moon by Mary Kathryn Nagle, as well as Nagle’s new play Sovereignty for Heller Theater Company at Tulsa Performing Arts Center. As an actor, she has appeared most recently Neechie itas, Missing Peace Perhaps the World Ends Here, and the world  premier of Distant Thunder. In February, 2019, Dr. Dunn completed a residency at the University of Michigan’s Global Theater and Ethnic Studies Program, commissioning her newest play, Three Sisters. Dr. Dunn is currently Assistant Professor in the Department of Theatre and Dance at California State University, Los Angeles, and is Artistic Director of Oklahoma indigenous Theatre Company in Oklahoma City.

Lulu Goodfox as Maya
Lulu Goodfox is excited to be making her Zoomlet debut with the San Francisco Playhouse.  Previous credits include Gloria in Wait Until Dark with Town and Gown Theatre, Clara in Nutcracker with Stage Right Productions, Captain Hook in Peter Pan Jr with Pawnee Arts and several other children’s theatre productions.  She is currently a student at Stillwater Middle School.  She is from the Grayhorse District of the Osage Nation and the Chaui and Skidi Bands of the Pawnee Nation.  She is an aspiring actress and hopes to study acting in New York City upon graduation from high school.  She loves to act across all platforms but really enjoys the theatre the most!