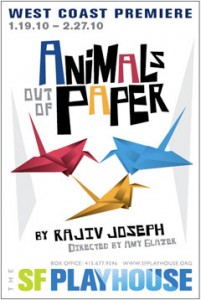 Fresh from New York we are proud to present a playwright that is about to explode nationally. His NY hit, Bengal Tiger in the Baghdad Zoo will re-open in LA this May after a sensational run earlier this year.

Animals Out of Paper begins as a quirky comedy about origami experts and deftly transforms into a melancholy reminder that close friends make the worst messes. The journey from one extreme to the other is surprising and specific, pulling honest insights out of unusual situations. When a world renowned origami artist opens her studio to a teenage prodigy and his school teacher, she finds that life and love can’t be neatly arranged in this dramedy about finding the perfect fold.

Cast and crew of Animals Out of Paper

Cast and crew of Animals Out of Paper