Water by the Spoonful by Quiara Alegría Hudes 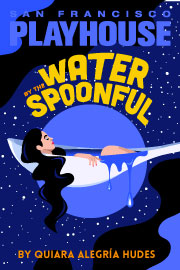 Water by the Spoonful

“Such a breath of fresh air … Beautifully performed by the entire cast. ” – KPFA

Somewhere in Philadelphia, Elliot has returned from Iraq and is working at Subway while trying to jump-start his acting career. Scattered throughout the world in chat rooms, recovering addicts keep each other alive, hour by hour, day by day. In this surging drama by Quiara Alegría Hudes (In the Heights), the boundaries of family and community are stretched across continents and cyberspace as birth families splinter and online families collide. Winner of the 2012 Pulitzer Prize for Drama, Water by the Spoonful is a heartfelt meditation on lives on the brink of redemption.

QUIARA ALEGRÍA HUDES is the author of a trilogy of plays including Elliot, A Soldier’s Fugue (2006), Water by the Spoonful (2011), and The Happiest Song Plays Last (2012). Elliot, A Soldier’s Fugue premiered Off-Off Broadway by Page 73 Productions and was a finalist for the 2007 Pulitzer Prize for Drama. Water by the Spoonful premiered at Hartford Stage Company and won the 2012 Pulitzer Prize for Drama. The Happiest Song Plays Last will premiere at the Goodman Theatre in Chicago in April, 2013. Hudes wrote the book for the Broadway musical In the Heights, which received the 2008 Tony Award for Best Musical, a Tony nomination for Best Book of a Musical, and was a 2009 Pulitzer Prize finalist. Other works include the plays 26 Miles and Yemaya’s Belly and the children’s musical Barrio Grrrl! Hudes grew up in West Philadelphia where she studied music with Don Rappaport, Dolly Kranzapolski, and Linda Hudes. She was later mentored by playwright Paula Vogel at Brown University. Hudes is an alumna of New Dramatists and sits on the board of Philadelphia Young Playwrights, which produced her first play in the tenth grade. She now lives in New York with her husband and daughter. quiara.com