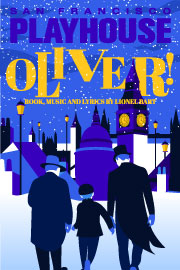 “Musically, Oliver! is a gem” – The New York Times

The streets of Victorian England come to life as Oliver, a malnourished orphan in a workhouse, searches for what it means to be part of a family. Lionel Bart’s classic musical received the 1963 Tony Award for Best Original Score, and was adapted into an Academy Award-winning film.

Lionel Bart (Writer) Born in London on 1st August, 1930, Lionel Bart was educated in his native East End before gaining a scholarship to St Martin’s School of Art. In 1956, he joined some friends in a skiffle group called ‘The Caveman’ featuring Tommy Steele. With the Bart song Rock With The Caveman, Steele launched his career with a UK Top 20 Hit in October of that year. Tommy Steele’s early screen career featured many of Lionel’s songs specially written for him including: The Tommy Steele Story (1957), The Duke Wore Jeans (1958), Light Up The Sky (1959) and Tommy The Toreador (1960) which featured the Top Ten single Little White Bull.

Lionel became a ‘disciple’ of Joan Littlewood at the Theatre Royal, Stratford East, and fell in love with musical theatre. This led to two early successful stage shows, Lock Up Your Daughters and Fing’s Ain’t Wot They Used To Be both in 1959, the same year as his classic Living Doll for Cliff Richard was a Number One single. 1960 opened with Do You Mind – another chart topping singles, this time for Anthony Newley, but the best was yet to come. Packed with wonderful songs, Oliver! opened at the New Theatre, London in June 1960 and ran for over 2500 performances. An instant success, it opened in New York in 1962 to great acclaim winning the coveted ‘Tony’ Award for its creator. The classic ballad ‘As Long As He Needs Me’ providing a huge hit for Shirley Bassey.

With Oliver! still running, Bart launched three further shows: Blitz (1962), Maggie May (1964) and Twang (1965). During this time he continued to write for the cinema, notably From Russia With Love from the second Bond movie and a chart success for Matt Munro. In 1968, Oliver! was transformed into a lavish feature film. Perhaps the last of the classic screen musicals, the film received universal acclaim, collecting six Oscars and the soundtrack album going Gold. For some years Lionel remained relatively inactive, his music kept alive by a steady flow of stage revivals, the enduring power of Oliver! and an unexpected hit single in the form of Cliff Richard with the Young Ones 1986 rendition of Living Doll.

His real renaissance started in 1989 when he wrote and starred in the Abbey National Building Society TV advert with the accompanying single – Happy Endings. In 1992, the National Youth Theatre brought Blitz! Back to the West End and in the following year Maggie May. In 1994 Big Audio Dynamite revived Rock With The Caveman featured in The Flintstones movie soundtrack. In 1994, Oliver! his masterwork, was given a new, acclaimed revival at the London Palladium Produced by Cameron Mackintosh and Directed by Sam Mendes.

Lionel Bart’s international reputation as a composer, lyricist and playwright spanned more than four decades and included no less than nine Ivor Novello songwriting awards, the many Oscars for Oliver! and he was the first British composer to receive a Broadway Tony Award. In December 1997 Lionel was honoured with a Variety Club Silver Heart for Contribution to the World’s Musical Theatre.