The Rules – Cast and Creative Team

Amy Lizardo (Mehr) is a Bay Area actor, singer and teaching artist. Her recent credits include: The Unfortunates with American Conservatory Theatre, Party People with Berkeley Repertory Theatre, The Tempest with California Shakespeare Theater, Hundred Days with Z-Space, Dogfight with San Francisco Playhouse, and Hedwig and the Angry Inch with Boxcar Theatre (SFBATCC award nominee). Amy graduated from San Jose State University in 2010 with a Masters degree in Theatre.

Johnny Moreno (Valmont) has appeared throughout the region and has had the pleasure of working with some of the best actors in the Bay Area including No Mercy with Lisa Steindler, Pentecost with Delia MacDougal, Mary Stuart with Marco Barricelli, El Otro with Sean San Jose, Displaced with Jarion Monroe, Stupid Fucking Bird with Carrie Paff, Threepenny Opera with Will Springhorn Jr., My Fair Lady with Charles Dean, On the Waterfront with Summer Serafin, Juan Gelion Dances for the Sun with Nick Sholley, Period of Adjustment with Patrick Alparone, Gibraltar with Dena Martinez and Joan Mankin, Venus in Fur with Elena Wright, Camelot with Monique Hafen, Promises, Promises with Jeffrey Brian Adams, The Rainmaker with Randall King and Joe Estlack, Addams Family with Allison F. Rich, Blade to the Heat with L. Peter Callender, and his personal favorite: Picasso at the Lapin Agile with Jessa Brie Moreno. He is a graduate of the A.C.T. Master of Fine Arts program.

Karen Offereins (Julia) is excited to be making her SF Playhouse debut. She was last seen in Dark Porch Theatre’s The Diplomats and in Shotgun Players’ The Mousetrap this year.  She has previously performed with Shotgun Players, Word for Word, At Last Productions, Wily West Productions, Custom Made Theatre Co., SF Olympians Festival, Thunderbird Theatre, SF Theater Pub, Bay One Acts Festival, No Nude Men, AtmosTheatre, Theatre Q, and Theatreworks.  She can next be seen in a staged reading of brownsville song (b-side for tray) for Shotgun Players in August.

Dipika Guha (Playwright) was born in Calcutta and raised in India, Russia and the United Kingdom. She is the inaugural recipient of the Shakespeare’s Sister Playwriting Fellowship with The Lark Playwrights Development Center, A Room of Her Own and Hedgebrook. Her plays include I Enter the Valley, a Weissberger nominee ’14 and a Finalist for the Ruby Prize ‘15; Mechanics of Love produced at Crowded Fire Theatre; Blown Youth published by Playscripts and The Rules. She is currently under commission from South Coast Rep and Oregon Shakespeare Festival. Her play The Art of Gaman will be developed at The Ground Floor at Berkeley Rep this summer. Her work has been developed at Playwrights Horizons, Rattlestick Playwrights Theatre, The Atlantic Theatre Company, the Drama League, Cutting Ball Theatre, New Georges, Roundabout Underground, Shotgun Players, Red Bull Theatre, Leviathan Theatre, Naked Angels, The Cherry Lane Theatre, One Coast Collaboration, The Sam French OOB Festival, The 24 Hour Plays on Broadway and the Tobacco Factory (UK) amongst others. She’s been awarded residencies at the Hermitage Artist Residency, Djerassi Resident Artists Program, SPACE at Ryder Farm, McCarter Theatre’s Sallie B.Goodman Residency, Ucross Artists Residency and the Rasmuson Foundation in Sitka, Alaska. She’s an alumnus of Ars Nova Playgroup, the Dramatists Guild Fellows Program, Soho Rep W/D Lab, the Women’s Project Lab & the Ma-Yi Writer’s Lab. Dipika received her BA in English Literature from University College London, was a Frank Knox Fellow at Harvard University and received her MFA in Playwriting at the Yale School of Drama under Paula Vogel. She has taught playwriting at theaters, universities and non-profits across the country, at Bryn Mawr and Fairfield Universities, the Co-op Performing Arts High School and Young Playwrights Inc and Fellowship Place, a non-profit supporting adults with schizophrenia. She is currently a Visiting Artist at the Schell Center for International Human Rights at Yale Law School. She is also a Resident Playwright at The Playwrights Foundation in San Francisco where she continues to develop her work. Despite a very long run in the United States she still drinks tea. www.dipikaguha.com 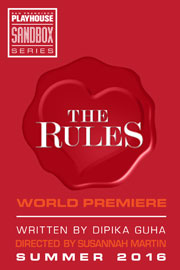